Video Kid by Pixel Trip Studio is a trip down memory lane. You’ll traverse up the street while playing in a fast paced obstacle course all the while getting gobs and gobs of pixelated 80’s references thrown at you as you go.  Blink and you’ll likely miss them they pass by so fast but if you keep your eyes peeled you’re likely to see He-man, Baywatch, Lethal Weapon, the A-Team, Ninja Turtles and so, so many more pass by. The levels themselves are somewhat procedurally generated so if, when and where you see many of these characters changes each time you play even though the overall look of the level doesn’t change. 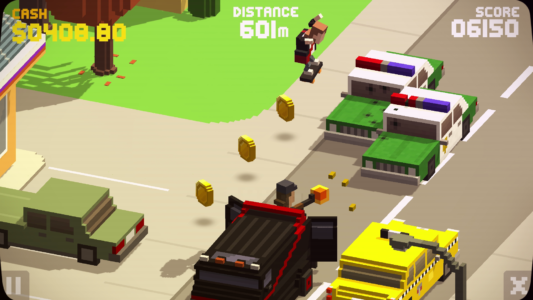 Most often you’ll see it compared to Paperboy because it shares the same basic gameplay mechanics, move through the level delivering an item and avoiding all obstacles while doing so. In the 80’s with Paperboy you played as a kid on his bike delivering newspapers and with Video Kid you are a kid dressed like Marty McFly (Back to the Future) riding a skateboard delivering old-school VHS tapes – those things we used to watch movies before DVDs.  You’ve got three lanes to work with as you traverse the level with the left two being the safer options and the right side leading to a quick wipe if you don’t watch closely or are too slow to react. You can quickly move between each lane either one at a time or all the way across though the timing on the controls seemed slightly off with some of the obstacles so it may take some practice to get a good feel for them.

Aside from the dodging and tossing of videotapes as you go there is a jump mechanic that allows you to hop over some, but not all, of the obstacles and it can be used to even hop up onto cars as you cross lanes of traffic and there are a couple power ups you can acquire that affect things like your throwing speed or jump height. Even once you’ve got a good sense of the controls, the game gets more difficult the further in the level you get and I was never able to fully complete the level. But just because I couldn’t do it doesn’t mean there isn’t an end, each time you complete a run your greeted with a screen that tallies up the number of tapes you’ve delivered and the percentage of the level you managed to traverse. 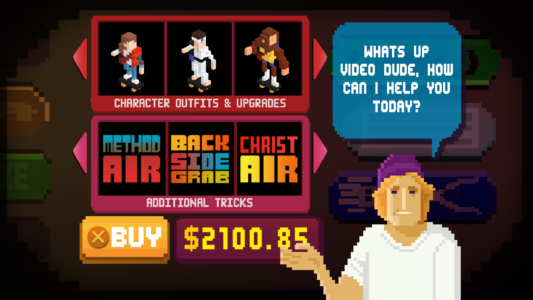 After you see the score for your attempt you’re greeted with an option to visit the in-game store which uses the coins you’ve acquired while delivering VHS tapes in each of your runs. These coins can be spent on things like some extra tricks with your skateboard (though this didn’t seem to do too much that I could see or that really stood out in any significant way), and different character skins.  Each of the character skins are also really great call-backs to different 80’s characters like Teen Wolf, Commando and Karate Kid and while I tried out several my favorite has to be the Arnie “Commando” one. The one annoying thing with this was that the buttons seemed to be reversed at specific dialog screens in a way that was designed to get you to go to the in-game store so if you were in a rush to get back to gameplay and were just button-mashing to continue you’d end up in the store at times and then have to exit the store to get back to the level.

The game looks and sounds as expected of a pixelated arcade game. The sound mixing could use some slight tweaking, maybe better fading out the background music a little more or slightly before you get the other sounds and music for each of the nostalgia references that streak by. The controls themselves could also use a little tweaking as at times they feel almost like there’s a slight input lag between when you tell it to move yet at the same time with the joy-con controller stick it often was a little too sensitive causing me to shift over two lanes when I only wanted to go across one.

This is very much one of those games you can say is easy to learn but extremely difficult to master.  The controls are very straightforward and quick to pick up but as the level goes on and the difficulty goes up it can also be as frustrating as it is fun to play.

Maybe it’s the heavy focus on the 80s but I found Video Kid to be fun to play, even with the issues I had with the controls and never being able to actually finish the level. There are points in the level at times that it can be quite frustrating, especially when you encounter an obstacle that you can’t seem to find a way past or if you did get past it before seems like it was just blind luck.

The challenge is the main reason to play. Hitting each run and trying to do better than the last time is really the reason to keep playing though if that wasn’t enough of a reason, for those that like to grind for rewards you can also unlock new character skins to play as, some with their own sounds.  Many don’t actually take too long to unlock but there are a few that will take quite a bit of time sunk into the game if you wish to get access to them.

$3.99 on Steam and Microsoft Stores and $4.99 for the Nintendo Switch.  Video Kid is easily less than the cost of even a matinee movie ticket and if you can deal with the controls and challenge it can be a good time filler.

A review copy was kindly provided for the purpose of this review and the game was played on the Nintendo Switch.