Beautiful scenery, minimalistic UI, haunting score, and puzzle mechanics that have you soaring as a literal bird one minute and playing as a child the next – What is not to like about Vane? Well, a few things…

Vane was played on Windows, and a review key was kindly provided by Friend & Foe Games. 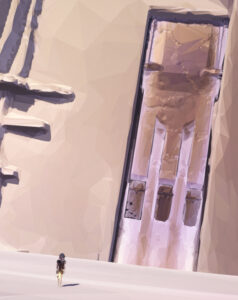 Vane takes you to a world of deserts and storms, dotted with signs of past civilization and watering holes, and throws you at the environments with no warning or story. This is very much developer Friend & Foe’s stated intent: provide no clues or story, but let the setting speak for itself through environmental storytelling.

This is also where some players will want to stop. There’s nothing explicit, no handholding, no quest-list and mini-map with X marks the spot. Instead, you’ll fly above the scenery scouting for the next thing that might help you forward, the next oasis, the next golden seeds, the next doorway, however long it takes.

I’ll only fly away

This idea of just exploring and taking in the world is the game’s point, with puzzles that are largely straight forward and levels that mostly only have a single path through them. Yes there are branches in a couple of places, and even the completely unnarrated story has them, but there’s no way to outright fail or get lost.

Depending on the player, there’s perhaps two-and-a-half to 3 hours of gameplay in the first playthrough – I spent just over 3 hours going at it slowly and walking away from the game at one point because of camera-issues.

The game definitely has an aesthetic, whether you’re flying across sand dunes, exploring a cave, or pushing a giant ball through ruins, but there are a couple of points where it got difficult to tell whether certain effects (no spoilers) are part of it or might be glitches. As a reviewer this is an uncomfortable position to be in, but as a player it tears your out of this suspension of disbelief we all engage in

I don’t know where my camera is

The game takes its origin on the PS4, releasing there at the beginning of the year, and you can feel it. Sometimes the camera is locked in positions where you cannot easily walk down a path using WASD, or it rotates making walking in a straight line awkward without a controller.

And the camera remains the biggest issue throughout the game; It moves from side to side, pulls back or in close depending on the scene, much like plenty of other games, but somehow it keeps getting in the way or stuck behind walls, or just fight with the player as you try to look around. No other game I’ve seen has made simply viewing it this difficult, and for a game focused on showing off its world, this is doubly frustrating.

There’s an excellent little gem here, marred by issues that should have been addressed since the Playstation 4 release, and all I can hope for is that Friend & Foe games take another stab at this sort of thing because it’s definitely not a bad game. 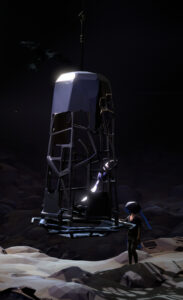 In sheer terms of visuals and sounds the game is great, ignoring some effects early in the game, and mechanically it’s mostly well made. Character controls get clunky, especially in the last level, and the camera is almost constantly fighting with you, but regular movement, on the ground and in the air works very well.

There’s a couple of places where the puzzles aren’t straight forward, and the ending can be rushed into headlong or spent a bit of time on to look for alternatives. A second playthrough doesn’t seem to change much of anything though.

Fun’s definitely the wrong word for this category here, but there’s an experience to be had. Whether it’s a good one comes down to how the individual views these, and many will argue that Vane is less of a game and more of an experience, but I thoroughly enjoyed it

If you’re super focused the first playthrough can be done quickly, and there’s no obvious reason to go back for more. Half an afternoon, or a late evening, and Vane is done.

At the time of this review Steam doesn’t show a price yet for this game. PSN, where it has been out since January 15th, lists it at around 22 bacon-tokens, which seems on the high end of the scale for what you get considering the alternatives available. At 10-15 beer tokens it would be a good buy, but even then only if you’re OK with this sort of minimalistic experience.
UPDATE: The game has been released at €19.99 on Steam, with a 10% for the first week making it €17.99.