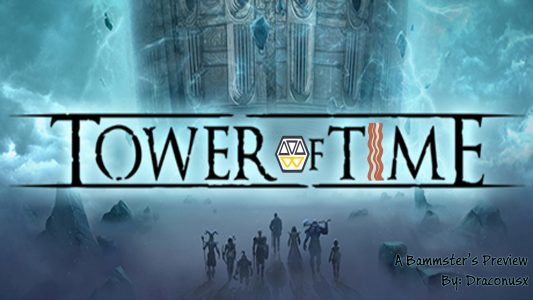 A key for Tower of Time was kindly provided by the developers and the game was played on PC.

Tower of Time claims to be a new take on the good ole classic RPG. The story seems to take place in a future in the midst of an “end of days” type of event.  Much of what I’ve seen from it seems to fit the same RPG-type mechanics though with one notable difference; you’ve got your top down isometric view and a group of characters banding together adventuring through a dungeon crawl, however one interesting stand-out feature is the ability to slow down time during combat. You don’t outright pause the game and it isn’t turn-based, instead you hit a key and time slows to a crawl, allowing you to switch between characters and direct them where to go/how to attack and while you’re doing that, your enemies are slowly coming at you, so if you take too long deciding you’ll waste that advantage.

After the first couple hours of the game I’ve only glimpsed at the character skill trees for the first 3 characters but thus far it seems each character will have a chance to progress 8 different skills with optional paths in each and be able to activate 4 of those at any given time during combat and some of those skills are what you might expect out of a game like this but others are really neat in how they are activated/display on the screen like the temporary earth-wall you can throw up to block off enemies and their ranged attacks.

I found it a little redundant and kind of strange the way they have you visit the same level in the Tower at the beginning of the game, first as a boy, then again right after a cut scene only this time as an adult.  Now when you return “years later” the character you’re playing as has little to no memory of having been there.  I would think this might work better if they left out the part of you playing as a boy entirely they could still use the cutscene and flash images of the tower to accomplish the same thing but give you a better feel of how the character would be seeing the Tower all those years later and it would be a little less awkward for the player experience. 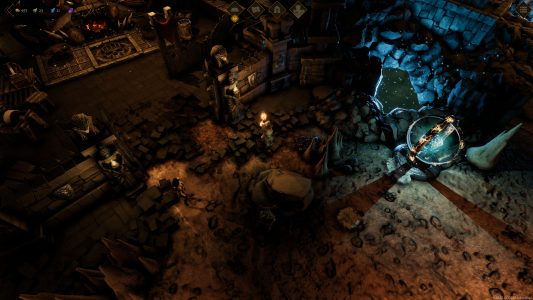 I didn’t particularly care for how the game takes you from the main adventuring floor to a “tactical map” during combat and then throws waves of enemies at you. I would have prefered your typical approach in RPGs like this where you fight what you see on screen and where you see them, rather than it loading me into a different area and then at times being surrounded by enemies coming at me from all sides. This felt kind of like a call-back to older RPGs that did something very similar to this though.

One other gripe I had about the game is that you can’t rotate or move the camera outside of combat, (and inside combat you can move but still not rotate the camera).  The game map doesn’t quite match up with the angle of the layout on the screen and while this is a very small thing it at times made it slightly confusing when trying to navigate an area.  Even if the camera is going to be locked in at a certain angle, I still appreciate being able to zoom in/out, move, and rotate that camera around any time I’m exploring around a game like this. 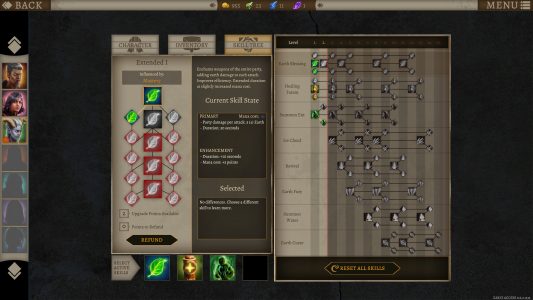 From what I’ve seen thus far and read online it appears there is plenty of lore to discover in-game about the world and the story you’re playing through.  The game itself has an interesting vibe to it as you are learning about the apocalyptic situation you are currently in while also getting to learn about what the world was, once, long ago before magic came into the world and how magic has affected it since. While I’m still early into the story of the game it certainly appears as if the problems that might end this world are tied in some way to the appearance of magic and it’s possible abuse. It will be interesting to see how the story develops in such a way that magic can be used to save the world or if it would need to be abandoned entirely else risk the end of this civilization.

Design:  8
The environments, the creatures and the overall feel of the game look really good and the background sounds, effects and music sound are a wonderful combination. It could use with some additional camera controls but otherwise functions well.

Challenge:  8
The battles are fun and engaging and with the ability to adjust the difficulty you should be able to find middle ground to get a challenging and enjoyable experience. I did struggle early on with a few of the encounters but things got better once I found additional characters to add to my party.

Fun:  8
I found the game to be quite a bit of fun. While I didn’t particularly care for how entering combat the game switches to a smaller combat zone/tactical map that sends the enemies at you in waves, I still enjoyed playing. The way in which some of the skills/spells work is also neat and at times very interesting.

Replay/Longevity:  7
As with many games like this the fun for fans is often in playing through and trying out different character builds/skills and scouring areas to look for missed secrets and lore which as I mentioned before it looks like there will be plenty of.

Price:  8
Tower of Time is still, at the moment, in early access and bugs and changes should be expected though thus far what I’ve seen is a pretty polished project. They list 25+ hours of gameplay currently and for $15 I’d say it is well worth that amount even just for a single play-through.

Overall Score: 7.8 out of 10.
Overall this has been a fun game to look at and I’m looking forward to delving into it more and if this is the type of game you’re interested in, if you enjoy RPGs I definitely encourage you to go and check it out.  Until next time this has been Draconusx with our look at Tower of Time.