The Void Rains Upon Her Heart is a bullet-hell, boss-battling, shoot-em-up with some dark themes and interesting game mechanics. The game is being made by one developer who notes the game contains subject matter based from anxiety, depression, and suicide as well as some light artistic nudity (which can be turned off in the settings if you choose). The game has a cool retro-game sound with darker tones in the music, which I rather enjoyed. 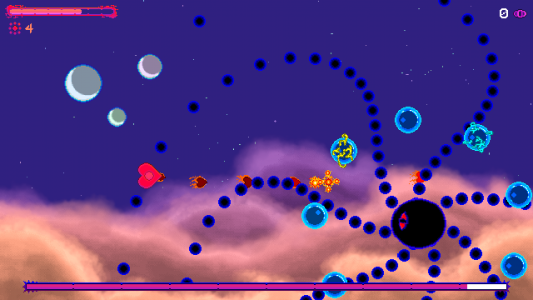 At first look, the game is much what I would expect from something in this genre. Constant fire, lots of projectiles to dodge, and large boss-creatures with different attack patterns. But instead of gaining power ups on screen throughout the levels, you unlock cards as you play, and then use something called ‘Tetrids’ to activate those cards to gain the power up. The story parts of the game are both dark and yet in some ways hopeful and it takes a kind of “Care Bear” stance at defeating the monsters and darkness that close in around the main character.

Flying a heart-shaped ship with a small circle at the center, your job is to defeat each of the nightmarish creatures you encounter by shooting them with heart-shaped ammo, while at the same time not allowing that center circle to be hit by any projectile. You have two secondary attacks, one of which is a more powerful shot you’ll need to charge up, the second, which acts as both a shield and a large circular attack, will take out any projectiles within it while simultaneously damaging your foe.

One thing I’m used to with this type of game is having to fly through entire levels to defeat hordes of enemies before finally reaching a boss. But Void Rains does away with all that and throws you straight at the boss the moment you start, and I quite liked that. 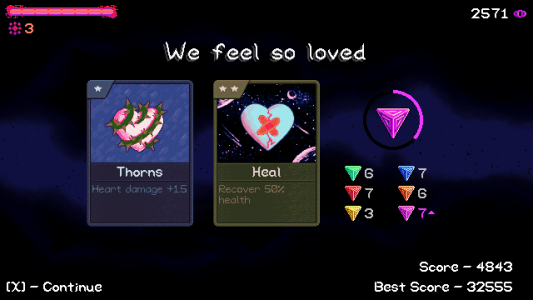 Activating power ups from the cards you earn can only be done by exiting the current playthrough and going back to the ‘Gifts’ section of the main menu. Each of the cards require different amounts and types of ‘Tetrids’ to activate them, so you may need to farm different boss encounters to get what you need. Each boss shows a different symbol on its card before you fight it and pay close attention to those because they can change from game to game, so if you’re

trying to farm a specific type you’ll want to keep an eye out on that part of the card. Once you’ve unlocked a card and have enough of the proper ‘Tetrids’ you can then activate it, and gain the power up to be used during gameplay. Certain cards activate right away when you defeat the boss and unlock them, but most will need activated with the proper ‘Tetrids’.

The game kind of lulls you into believing it is rather easy in the beginning and then at times, if you’re not being careful, it can catch you off guard. I found it fun and enjoyable to play and so far have liked how the difficulty has progressed as you play. I expect die-hard fans of the genre might find it too easy starting out, but from some of the videos I’ve seen of later levels the difficulty can jump up quite a bit.

As it’s in Early Access, you’ll currently only have access to 2 different characters or ships to fly and 14 boss-monsters to combat against, but the developer plans to more than double that and the other content in the game by final release. The developer is also looking for feedback on Steam, so if you play this and have suggestions, be sure to post them there.

The game releases on February 14th in Early Access on Steam for $7.99 (there will be a 15% discount during the week it launches).

The developer from Veyeral Games was kind enough to provide a review key for us and the game was played on PC with an X-Box controller.

The Void Rains Upon Her Heart