Ever since the first multiplayer games on PDP-11s in the early 70s, and later on individual computers connected by serial-cables or MIDI-connectors, player-counts have been dictated by a mix of gameplay designs and the technical limitations of servers, from 2v2 shooters to hundreds in Planetside 2, to thousands of ships in EVE:Online, but what happens if you could remove the technical limitations?

Recently we had a chat with CCP Games, the developers behind EVE:Online, and Hadean, a company that has made a new kind of server backend. In this article, and the next ones, we are going to look at what happened when they met and created the EVE Aether Wars tech demo, and what that might mean for the world of EVE and gaming.

Seventeen years ago a bunch of volcanic banana farmers first released a space-sim known as EVE:Online, wanting to make a universe without restrictions, letting people play however they wanted, scaling from 1v1s to giant battles, and by 2006 EVE was already generating stories of epic battles. In january 2018, at “The Siege of 9-4”, EVE saw its largest fight so far, with 6142 players duking it out in spaceships of all sizes, but there was something that might seem odd to outsiders : The game was effectively running at a slowed-down pace to be able to process the thousands of players, and extreme number of drones, missiles and whatnot being deployed.

This slow-down is known in the EVE universe as Time-Dilation, or TiDi, which kicks in when the server’s process starts to have problems keeping up. Sure, computers have become a lot faster since the Pentium 3s that EVE was originally built on, but when you run a super-optimised single-threaded simulation on modern processors, things aren’t all that much faster than in the old days.

So jump to about early 2018 and CCP Games were wondering why no one else had taken the same path as them, while the people at Hadean were bringing their distributed computing solution, The Hadean Platform, to gaming in what would later be named Aether Engine. The two were introduced to each other and by late 2018 EVE Aether Wars was born!

Well, perhaps it’s not that straightforward. 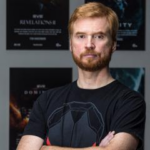 You see, an inconvenient fact about multiplayer game-engines is that there is only so much you can learn from simulations and drawingboard sessions. Hadean had shown their system can work in other areas, but as CCP’s CEO Hilmar said,

“making a computer game is maybe 50% academics and 50% artistry and emotions and things that don’t really have much to do with the technology.”

Thankfully, CCP had just what the doctor ordered:

This team-of-4, a Technical Director, an Art Director, one Engineer, and one Technical Artist, got to work and the EVE Aether Wars tech demo was basically written from scratch, with all the freedoms and limitations that come with a small R&D project. Limited man-power and budget, even as they occasionally borrowed an engineer here and there, but also no strict design documents and goals to follow outside of what the game-designer-turned-artist on the team brought forward.

One requirement that was brought up was that it still had to feel like EVE. The camera trailing the ship, the free look-around, the visuals all had to be just right, and adding WASD controls, and gamepad, meant there was a need for a lot of experimentation. CCP are also the first to say they didn’t get it 100% right, but then you bulldozer your little rose garden and try something else.

Assets were lifted from EVE Online and transferred into Unreal 4, in what would become a separate learning experience with migrating EVE visual assets to the latest Unreal Engine with all its fancy options like ray tracing. Lessons that might just come in handy as CCP has been working on a new Action-MMO in Unreal 4, still unannounced at this point. And no, CCP were not ready to talk about that just yet.

James’ team got the whole thing to a point where they not only wanted to show the world what they were doing, but also very much needed the help of the EVE fan base to stress test everything. 3,852 players dutifully showed up for the first test-session, and were joined by 10,000 artificial clients to help get valuable data about the load on servers, and on networks. 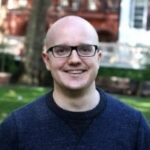 As James told us,

“We just wanted to kind of get to know Hadean a little bit better, experiment with their stuff and as we got more excited things kind of just started happening.”

Over the following 3 months, Aether Wars was taken apart completely and put back together, and at Gamescom, August 2019, a 2nd test was run with a goal of 10,000 concurrent clients using real and artificial entities. Incidentally, this is also where we first caught up with Hadean, at their DevCom presentation.

The core goals of these first 2 tests were really about learning, experimenting, and getting hard data, and all of that went into the 3rd test, which was more focused on the gameplay experience. During EVE Invasion London, in November last year, that third, and at least for now final test was run. Over 3000 players from across 80 countries got into the real-time dog-fight, and the feedback has, as we were told, been hugely positive.

The Results Are In 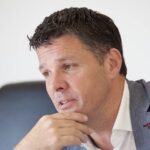 From Test 1 to Test 3 the teams at CCP and Hadean made huge strides, resulting in things like optimising bandwidth usage by 100x As Craig Beddis, CEO of Hadean, tells us,

“The largest portion of the cost of using Aether Engine is the bandwidth from the simulation to the players’ clients,”

so getting that down was an important goal on the road forward.

But beyond that, both teams had important take-aways from what was basically a large-scale tech-demo.

For Hadean, Craig reflected that,

“One of the biggest things we learnt about our Aether Engine is that iteration cycle and ease of use is super important. No matter how impressive the technology is, having a good and efficient workflow is essential.”

It’s no secret that game-development is super iterative, and game-developers need to be able to quickly throw things at the wall and see what sticks….and what doesn’t. This has also been a recurring theme when Bammsters have spoken to other game developers about game development in general. 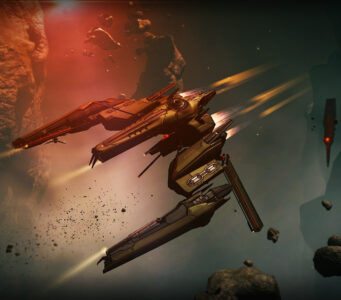 CCP on the other hand, their biggest take-aways may have been the excitement of what a real-time platform has to offer, and the ideas that this has brought along.

“I think what we’ve seen internally is a lot of kind of creative inspiration not just for the small R&D group but for the EVE Online team as a whole” was the recurring message from CCP and James, “so it started to I think make people see a vision that we’ve had for the long term a step closer to short-term reality.”

The prospects of EVE Fleet Battles without the limitations in the current simulation model means more layers to the theater – A Battle of Endor conflict, straight out of Star Wars, from the engagements on Endor, to X-Wings and Tie-Fighters, up to Battle Cruisers. Or, in EVE parlance: mercs, Wraiths and Vulkans, and pipe-bombing Tempests, oh my!

We couldn’t help but call back to 2013’s Fanfest, where Hilmar himself presented the idea of, “One Universe, One War”, with EVE Online, DUST514, and EVE: Valkyrie eventually existing not only in the same IP, the same lore, but having real impacts on each other.

“So you could even go further back; You could go to Fanfest 2011, where we showed the Future Vision, and then 2013, ‘One Universe, One War’
yeah, I mean, we’re nothing if not consistent, trying the damn thing.
Yeah we’re just bloodedly stubborn – we won’t give up until that we’ve brought about. It’s taking a little longer than we estimated but that doesn’t mean it isn’t worthwhile to pursue.”

Exactly what that would look like, and how it could be done without risking the existing player-base remain to be seen. At Bammsters we’re cautiously optimistic, but we’re not the ones that really need convincing.

Walking On The Moon

All this is not to say that CCP is now ready to release their own version of the tech that underpinned Aether War, and make it part of EVE Online, but they are seeing more clearly what a future version could be, surpassing that 6-and-half-thousand record and having gameplay options that make use of real time combat. 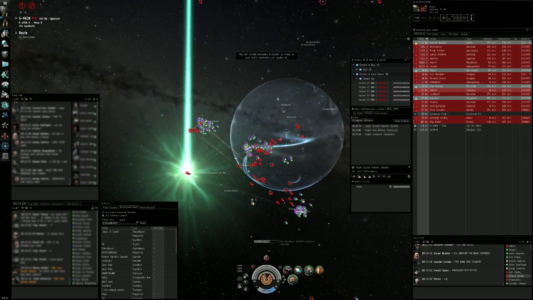 This also spins off into other areas, such as how they could translate more of EVE Online into a

gamepad control scheme, or how to navigate the spaceship soup of perhaps 10 thousand players. What does a fleet-commander role look like if they do not have that hard TiDi giving them time to react?

And these are just some of what CCP is now processing through, and they have started opening up positions inside the company, such as looking for User Experience Engineers to help guide them forward in all those areas.

One area where the EVE universe is growing right now is mobile. This August will see the official release of EVE Echoes on mobile devices. This could be interpreted as a step towards gamepads and a more arcade’y experience with EVE, but touch-based devices are natively much closer to pointing devices like computer mice, so while this has also informed CCP’s internal excitement for the future, it has had minor impact on the learnings from Hadean and Aether Wars.

For now, at least, EVE Online remains the very EVE Online people have been playing for the better part of 2 decades, with hopefully more giant fleet battles and stories of drama, but as EVE Aether Wars showed us all, CCP is also looking to a not so distant future of even greater fights, more direct control and new gameplay experiences. Hilmar and James have fired up the bulldozer, strapped a ray traced ice-asteroid to it, and are looking very intently at the rose garden.

Finally, over the next few weeks we will be bringing out more on Aether Wars and the Hadean tech, so if you enjoyed this one, like, subscribe, and turn on notifications to catch more of us!