Surviving Mars and its initial DLCs came out last year, and while we’ve been getting into it on the PC platforms, we decided to review a console version, specifically the PS4 release and the first DLC, Space Race. Before we get into the console bits, though, let’s have a look at the game.

Review keys for Surviving Mars and the 2018 Space Race DLC were kindly provided by Paradox Interactive.

Surviving Mars is a City Building Sim set on Mars, charging you with bootstrapping a society and achieving independence from Earth. It’s done largely story-less, although there are narrative elements and mystories during gameplay, and mostly focuses on the mechanics of building your sprawling city. All of this is well with-in Paradox’ core business of simulation games while giving fans a new experience.

There’s an absolutely functional introduction and tutorial that tells you about the basic mechanics while introducing you to the build menus. Steps are clearly explained in the context of when you should expect to be doing them, and the UI lights up to show you how. The tasks can be failed, esp if you deviate even the slightest from the instructions and spend your resources on something else, but there’s nothing that tells you you’ve failed.

Unfortunately, this is also the first let-down of the game. There’s a bit of narrative added to the tutorials to get you interested, but it’s rudimentary stuff; when you get into the actual game, there’s however nothing to guide you forward. For experienced sim-players this will not really prove an issue, though it may seem antiquated, while newcomers might find it jarring compared to modern in-story tutorials and introductions common in other genres.

As early Surviving Mars gameplay is all about bootstrapping, you start out with a sponsor, a rocket, some resources and a small quantity of all-purpose drones letting you build stuff in Mars’ mostly-absent atmosphere. Get the basics done, source some water, make some air, and perhaps build up storage, and you’re ready to build enclosed domes that can house your first batch of settlers. That first batch are the Founders, and work as a gate; You have to keep them alive (and on Mars) for a while before you’re allowed to bring in more settlers.

After that first gate, it’s about building out your fledgling village, starting to mine metals and rare resources, and researching larger domes. If you have the Space Race DLC, you can also start trading with the neighbours, allowing you to focus slightly more on one resource like food, and trade the surplus for other resources. For some reason, the passenger rockets come with an amount of food, and in the easier mode you can sort-of get all the food you need simply by regularly receiving tourists, at least for a while

There are also non-obvious things like people in a dome suffocating from lack of oxygen, with completely full backup tanks right next to the dome and zero leaks, or the concept of electricity that can leak into the atmosphere. Some of this might be UI, might be design, or might just be bugs, but either way will be plenty frustrating.

In Your Face, Neil Armstrong 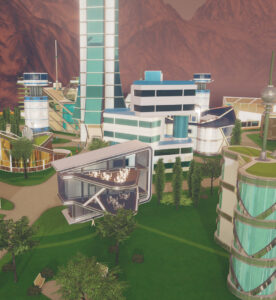 The basic game works well: Build stuff, mine stuff, build more stuff, optimise stuff, pretty normal fare for city-building sims. Events show up, you get some exposé about a thing, a few pop culture references and a randomly-selected storyline progresses ever onward.

The console port however is a bit funky, at least on the PS4. Controls are finicky, UI parts are far too small, and the game completely freezes for a while when saving …

The biggest annoyance is that the default UI setting seems very much intended for anyone using their PS4 with a desktop monitor, as if gaming on a regular Windows PC. Not saying that there aren’t a fair share of people who do this, but the default assumption should, according to the console makers, be that people are playing on a TV at some distance. This is becoming a more frequent faux pas with games converted from Windows to consoles and at least with Surviving Mars, one that Paradox has marched right into. There is a UI Scaling option in the menus, but it neither features a live-preview, nor does it scale well as larger elements quickly end up too large.

The controller scheme is a bit awkward and doesn’t quite match any games I can think of. You have to enter various menus using R1/R2 and Triangle, and then sometimes use the D-pad to navigate except when you have to use one of the sticks. R2 lets you access options for various units and buildings with R2 + other key working as general shortcuts. Sometimes the R2 option reacts quickly, other times you need to hold R2 for a couple of seconds, which may be linked to the chosen game-speed. When trying to issue commands I semi-often end up making a mess of them and have to re-do.

Minor things like the game abruptly stopping for several seconds while saving, or music cutting out during loads are probably things Sony should have flagged during Certification, but then we know Sony has largely given up on complaining or even testing during their Certification process, when considering several other recent releases.

This Is Gonna Be Gribbletastic

The core of Surviving Mars is absolutely a competent if a bit dated game despite releasing in 2018, and well worth a play-through or 2.

The visuals are great, the music and sounds fit well without being too 70s Sci-Fi’y. Everything really looks and sounds clear, with simple colours and animations for your buildings and installations, and nice colour-tones for wear and dust. The UI and controls however drag this score back down to a middling 5.

Taking the easier game-mode, of course there’s no challenge, but there’s plenty of further restrictions and goals to see players well challenged whether new to sims or veterans of the genre.

The little pop references, some perhaps a bit 1990s’ish, are well written, and the story-bits that do show up are both funny and unpredictable. Not in a laugh-out-loud manner, but you’ll have a good chuckle. Surviving Mars’ hard approach to the Tragedy of the Commons does however detract from the fun, at least for me.

It’s a City Builder, so if you don’t get at least some 10s of hours of gameplay out of it, well then perhaps it’s the wrong genre for you? Along with the options for different sponsors and difficulties, and the random mysteries, there’s plenty to do.

After that, there are more DLCs to be had in order to extend gameplay and perhaps fix omissions, but this of course turns up cost of ownership even further.