In ‘Shadow Bug’, you play as a heroic ninja attempting to save the forest you live in from an evil, monster-spewing factory by slicing and dicing those monsters to itty-bitty pieces. In some ways the premise reminded me a bit of ‘FernGully:The Last Rainforest’, and I immediately wished the silent glow-fly that acts as your pointer would have something funny to say (a la Batty) when you eventually get yourself killed and have to restart a level.

‘Shadow Bug’ is a side-scrolling platformer featuring 36 levels and 6 different bosses that you’ll encounter as you traverse the forest, along with some minor puzzle-solving. The forest backgrounds, and the indoor levels that come later in the game, are beautifully rendered landscapes, with a traditionally painted look to it. The main character, and much of the landscape you’ll interact with, are a monochrome black (with the occasional colored highlight), layered overtop of those pretty landscapes, mentioned above. While it’s certainly a change in how many games typically look like this, it creates a neat contrast that is interesting to watch. The music and sound effects are great compliments to the game and visual style, as well.

The game is being released on multiple platforms, though we played it on the Nintendo Switch.  With the dual controllers, you’ll move with the joystick on the left Joycon while pointing at the screen and attacking with the right.  There’s also a button to center or recenter the pointer on screen when needed. You can also play using the touchscreen which seemed to reduce the difficulty at times.  I imagine that on Windows or Mac, it will work similarly to the controller setup with the keyboard serving to move you left and right and the mouse acting as your pointer for attack (but I can’t confirm that). The general mechanics of the game are pretty simple. You can only move left or right and you attack your enemies.  That’s it, there’s no jump or other weapons to worry about but there are times when you’ll need to move up or down. Attacking enemies is what will allow you to move up and over as well as through the walls and obstacles. Beware of things like thorns that will put a quick end to your otherwise deadly little ninja.

The game uses a one-hit kill system and that goes not just for your enemies but for you, as well. You’ll want to move as quickly as possible through each level, collecting little light balls along the way for points, while killing your enemies as you go. All this while trying to make it to the end faster than the set time limit, beating your previous record, or even securing a top spot on the leaderboards.  Keep an eye out though – from time to time, there are spots that can be worth exploring just off the quickest path that afford you the chance to grab a larger light ball worth a sizable amount more in points.

‘Shadow Bug’ has been fun to play, both for the sheer fun of zipping through the levels and the challenge of going back trying to beat my times. It’s the kind of game I’d probably play on a portable device rather than sitting at my desk and it works well on the Switch in either mode of play.

We break down our ratings into five categories and rate the game on a 1 – 10 scale with 5 serving as “average” and then average those scores to a final overall rating.

The backgrounds are really neat and, in some ways, look like beautiful paintings

but you may not get much time to really enjoy them while playing due to the fast pace of the game. The music and sound are well done and a nice compliment to the action.

While some of the jumping puzzles or bosses can offer some difficulty, the real challenge in ‘Shadow Bug’ is in speedrunning. Many of the levels can be finished pretty quickly but with the report you get at the end of each level detailing your time and points collected, it almost feels like a dare to try and do it faster.

Whether played on a touchscreen or with the Switch controllers, the game was quite charming. It’s also great if you have limited time to play, like on the bus to work or in the back of an Uber, since the levels can be completed so quickly.

As mentioned earlier, in many ways speedrunning is the focus of this game, so it is easy to see how someone could get into replaying many of the levels trying to shave of a few seconds from their best time or even secure a spot on the leaderboards.

‘Shadow Bug’ is priced at $8.99 on Switch, $3.99 on Google Play & iTunes, and $4.99 on Steam (for PC and Mac).  While it does cost more on the Switch, (due to the cost of publishing games on that platform in cartridge form), this game is very fairly priced on the different platforms considering how much enjoyment you can get from both the initial playthrough and going back over and over again trying to beat your best times.

Muro Studios kindly provided a review key and the game was played on Nintendo Switch. 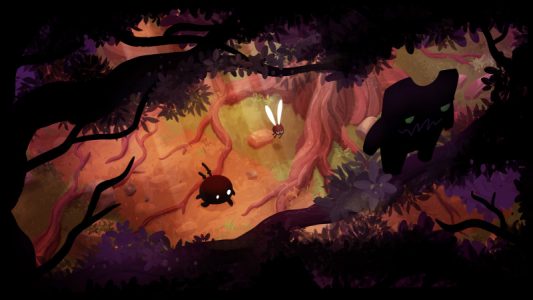