If you’re into Logistics Sims and Factory-builders, you’ve probably already heard of Satisfactory, but just in case you haven’t, here’s our little look at the game in Pre-release as of July 2019

So the best way I can think of for describing Satisfactory is by saying it’s first-person Factorio-meets-Subnautica without Factorio’s endless world and hordes of creatures to defend against, and without Subnautica’s… pretty much everything. Thank fuck, that also means no hunger or thirst to manage.

Satisfactory slides into the realm of Logistics/SCM Sims by having you land on an alien planet in order to explore and harvest it on behalf of a faceless but not voiceless corporation names FICSIT Inc. They’ve tasked you with working tirelessly for no pay to harvest everything by manually mining resources and then building conveyor belts and machines that mine resources automatically so you can make parts to build machines that can make those parts so you can make more advances parts … yeah, it’s turtles all the way down. 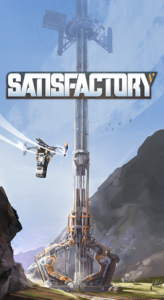 Presently there are 6 levels of technology, taking you from burning leaves to burning coal onwards to burning oil, and from copper and iron to steel and super-computers, with each step gated by requirements that more or less forces you to set up additional production. In parallel there’s a Space Elevator to be built and resources to be sent back to headquarters. Helping you along and giving you a respite from the factory floor is the exploring, where you can go look for more leaves to burn, animals to “render” into biofuels, and wreckages from what appears to be other FICSIT Inc employees trying to land on the planet. These last ones usually come with a hard drive you can analyse for alternative recipes, but you should consider holding off on that until you’re through the first tech-levels.

Because it’s early days there isn’t much in terms of story or lore, outside of some snippets in the early game, nor is there any endgame. Once you’ve hit the final tech-tier, and gone through the Space Elevator mini-game, it’s all about optimising flows, and building pretty conveyor belt weaves across the landscape. Sure you can go back to exploring the world, or ride the Monorail (“MONORAIL!”) around, but this is the lot with Logistics Sims, and you have to be a particularly type of person to like it, like me. Thankfully Coffee Stain Studios are putting out updates every few months, and while there still doesn’t appear to be any goats, there’s more tools and goodies to help you mine and move resources!

The game also supports multiplayer, though I’ve not managed to get it working. Probably something on our end, so we’ll skip this topic completely!

There’s definitely the bones of a functional sim here, with good graphics, fairly smooth movement, a simple but sane tech-tree, and if you’re into this sort of game you should at least put it on your wishlist assuming Epic have gotten around to supporting wishlists on their store. Do however make sure your computer is up to scratch, as trying it on a computer that barely meets the minimum requirements will have you in for a jerky experience right now. Polishing and optimisation will help alleviate that, but then further tech-levels and stuff to do will likely counter that.

Right now the game’s 30 bacon-tokens, and for the right person this will include 10s or even triple-digit hours of play, but if you’re unsure then perhaps hold off until some of the promised narrative elements are added. Mod support is also not a thing yet, and I’d wager probably not until release, but again it’s something that’s been promised. Finally, Satisfactory does largely live up to its name, thoough if they don’t fix it so you can actually pet the Lizard-doggo, I’m going to do something drastic.