Riverbond is an action adventure game with couch co-op for up to 4 players set in brightly colored voxel-based environments, from an isometric view.  You’ll combat a variety of enemies and slash, smash, and shoot things into tiny little cubes.

(The developer kindly provided us a key and the game was played on a Windows PC.)

Riverbond has a very cute design style to it that felt, in a way, like the old school pixel-graphic games but has jumped “off the page” into a 3D world. Everything from the costumes you unlock, the creatures you combat, and especially the environments you play through are very vibrant. You’ll take on different missions from the title screen, (at the time of writing this there are 9 total missions), each with its own different environment and there are a variety of enemies to face off against.    Each mission is broken into smaller pieces requiring you to complete certain tasks before unlocking a gate which allows you into the next section. I found each entire mission can be played through in less than an hour, though I spent extra time exploring the levels, so you might complete them much faster than I did. 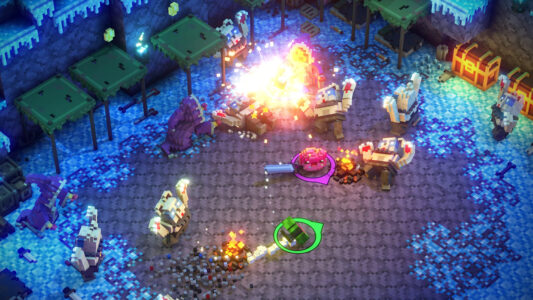 You’ll encounter NPCs along the way who share bits of info. You’ll also find chests and gift wrapped packages containing new character skins, weapons or other helpful items.  (I was even able to play as a piece of Bacon!!) You change out weapons on the fly between the five different slots you have available to use, but the character skins are only available at the start of a new map. (Speaking of maps, the levels you play through are fairly compact but I found myself wishing there was some kind of  minimap, but there isn’t anything like that.) Be careful swinging/shooting your weapons around though, as many of the items placed around the level are destructible. Who am I kidding? Shearing through piles of crates or a field of grass is actually rather fun and it is neat watching all that stuff pop into a bunch of mini blocks and disappear!  Another cool feature is, many of the things that you can destroy can also be picked up and hurled at your enemies to damage them!

The game starts out fairly easy, and as with many others, then slowly ramps up the difficulty of the enemies and the number of them you encounter.  There are checkpoints in several of the levels you play. When you eventually get slaughtered by a hoard of creatures you won’t have too far to go so long as you’ve activated the checkpoint.You will always return to the last one you activated and you are free to reactivate ones you’ve visited before.

Combat was fun when facing off against solo or small groups of enemies but at times you may find yourself swarmed. When that happens, prepare to die a couple times just to clear out the crowd, unless you can get a few at a time to peel off towards you.  Since you just respawn and there is no apparent penalty for death, the overall difficulty is pretty low even for kids or players (like me) who can just kamikaze their way through till they clear out an area. 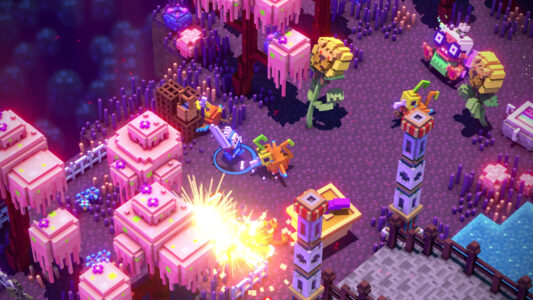 You can swing melee weapons, shoot ranged ones, and perform a leaping stomp attack to dish out the hurt.  I found trying to to shoot enemies was often too frustrating to aim when using a controller, but worked better with mouse and keyboard.  But I found it was more fun to play and easier to move around the game with a controller so I just didn’t end up using ranged weapons all that much.  For defense, you can roll-dodge to try and avoid punishment dealt your way, though the timing for some of the minibosses may require some practice. Luckily with all the enemies you’ll face off against, you’ll get plenty.

One thing I’m not certain I cared for was how the tethering mechanic worked between multiple players. When you play together and one of the players gets too far away, it teleports them back together.  I wasn’t able to discern a pattern as to how it makes the determination for who gets teleported. Sometimes it was the other player, sometimes it was me. I think I’d have preferred it stuck with the old mechanic where the screen only expands so far and then you just can’t move any further till one of you closes the distance. This way does, however, alleviate an issue where players might want to explore in different directions and don’t want to come back.  Thus it forces everyone to follow along with whichever player the game chooses, but it can be slightly disorientating at times.

Boss battles are much the same but with a much bigger creature to battle in addition to the mobs that spawn around it, and it has a much, much beefier health bar.  Once defeated, they pop out of existence, much like the destructible items scattered through each level in a massive cloud of mini blocks, which then dissipates. After all the running, slashing, and dodging, it’s rather satisfying. 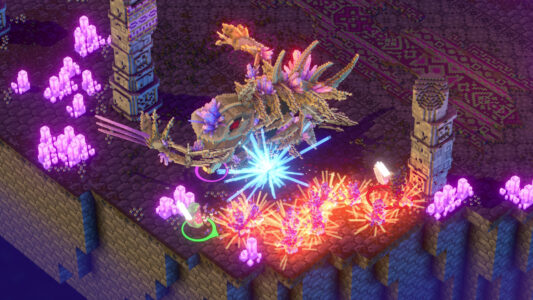 Here we break down our ratings into five categories and rate the game on a 1 – 10 scale with a 5 serving as “average,” and then average all the scores to a final overall rating.

This game has a great visual aesthetic which very much lives up to what it is advertised as.  The background music is very minecraft-esque, as are much of the action sounds, but that fits right in with the visuals.

Since the enemies keep the damage you’ve already dished out to them, you can just keep rushing back at them till you’ve whittled them down, so the only real challenge is to see how long you can stay alive each time.

Riverbond is a cute game, fun to play solo or with friends, and the minor frustrations I had with aiming didn’t really detract too much from the overall experience.

Personally, I don’t see much of a reason to jump back into the game once all the levels are completed, unless you wanted to do it again with friends, but your mileage on that will vary in part by how much you enjoy playing it.

At $24.99 and with the ability for couch coop or remote play on Steam, Riverbond seems like a pretty good deal to me.

I’ve had fun with Riverbond and can certainly recommend the game, especially for younger generations.

Riverbond is available on Steam, PS4, Xbox One, and now Nintendo Switch as well!