Experience the life of a man from infant to Bringer of Yellow Light, through a series of magical challenges that takes you repeatedly into a dark realm … Erhm, OK?

A review key for The Sojourn was kindly provided by developers Shifting Tide, and their publisher Iceberg Interactive, and the game was played on a Playstation 4

The Sojourn is at its core a first-person puzzler, where you navigate a series of challenges by activating or moving pieces around a map, and where you can at times opt for an additional challenge on a map for extra credits, or in the game’s nomenclature, Merits of Life.

Layered on top of the puzzle-game is a journey through the life of a character, seemingly separate from the player, as they grow up and experience events, the puzzles being Ersatz or replacements for the challenges the character experiences. It is also here the developers appear to use the game’s title almost as a contronym or Janus-word, the puzzles being the short stays or breaks in the larger journey reflective of how some in recent decades have started to use the word Sojourn.

Before looking more at the story and how it’s told, let’s dig into the puzzles.

Each is a stand-alone map, or 2 on a map where you have to solve them in sequence. You are loaded into the map and the world is assembled before your eyes in a quite nice animation. Someone’s had fun with vertex-shaders from the look of things! There’s no overview map or other way to explore the place, meaning you may have to solve part of the puzzle to get to where you can see the rest of the map, and this in turn can result in you having to reset the challenge due to a forced mistake. Where there are 2 puzzles, the second one is revealed once you get to the end, but these do not seem sensitive to how you solved the prior step.

The mechanics of the puzzles follow a well-known theme, where you move between two states, light and dark, to interact with objects. In The Sojourn’s version, you swap places with statues, “ring” harps (because harps…ring?), cross bridges that only exist in the Dark World, or move across obstacles that are only passable in the light world.

The game gives you 3-or-4 different ways of entering the Dark World, introducing them in stages that sort-of line up with the story. First you get a temporary gate into the Dark World that dissipates as you move, so plan those steps carefully. Later there’s a gate that swaps you between the Worlds as you cross it, which is more of a spatial challenge than temporal. Finally there’ll be an eye that places you in the Dark World as long as you keep eye-contact with it, the eye, staring down at you.

A Devil Of A Challenge

At least a not-insignificant number of the puzzles have more than 1 solution, or parts that can seemingly be cheesed; I say seemingly because in a couple of instances I’ve compared my solution to that of others (via playthroughs and Let’s Play videos), and they usually did the same thing. This isn’t a bad thing, but in a couple of cases it felt dirty working around an obstacle in about 2 seconds and then head straight to the exit.

There’s two issues with the puzzles that does need bringing forward: There’s too many of them, and their difficultness varies and feels uneven.

On the latter, in some settings access to a series of levels is indicated with numbers 1 through 4, 5, or 6, and doing them by number can give you a hard level, followed by an easy level, followed by a medium one. Sure, the measure of how difficult a puzzle is is subjective, AND it’s influenced by the player having solved other similar ones recently, but even if simply measuring in how many steps are required to solve one and how many times you need to interact with the same objects, it still holds that it isn’t a direct progression in challenge. The result is a feeling of anti-climax when you’ve passed a particularly exacting level, and then waltz through the next one, or you spend 15 minutes grumbling over the first half and then an Eye pops you past the obstacles of the 2nd half for a Merit of Life that tells you to cherish adversary.

And yes, there are too many puzzles in my not-so-humble opinion, in part because they don’t really vary enough to justify themselves. Each time a new mechanic is introduced there’s a few very easy levels to explain how they work, and some of these could easily be reduced to perhaps a single multi-step level doing the same, or to 2 levels. Then there’s just the sheer number of levels, as mentioned some with a 2nd part to them, that ends up feeling a bit like a slug; This may be to illustrate the lengths the Main Character had to go to in life, but detracts from the experience. As a counterpoint, plenty other story-supported puzzlers end up with arguably too few puzzles and challenges, so at least The Sojourn doesn’t have that problem. 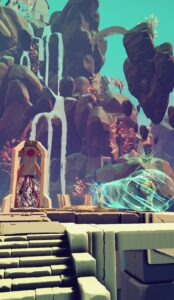 But overall, the puzzles ARE well made and often interesting, mixing the various mechanics in nice fashion and being attentive to not overwhelm any player, but if Shifting Tide ventures out to create another puzzler I hope they even out the challenges, and consider either having a bit fewer of them, or perhaps more variation in their mechanics.

The story in the game is told primarily through a series of dioramas, popping up as you enter an area, and later in the game changing to show a situation or an event changing. They start peacefully enough with the birth of the Main Character to a couple of blind-folded parents, and progress from there into childhood and adulthood as you enter new areas with new puzzles and puzzle mechanics.

Two secondary modes of conveyance also help tell the story, such as the settings and areas in the game, going through an urban setting, to a library, to a cold and watery area with fishing boats, and a dark, grim, and foreboding area. The other mode is in the Merits of Life which contain a brief ethical statement – these are optional, but gives a sense of the values our Main Character may be seeking out, and help atune the story.

Because of how the story is primarily shown, and not put in words, it is very much open to interpretation. At its core it is a Saviour story, about the Main Character rescuing The People from their blindness and The Purple Men, and The Tree of Lies, while not going into depth on who those people are, or the real source of the blindfolds. It is then left open to the player to superimpose their world onto this to interpret on what they are shown.

This is where the game failed me, or perhaps where I failed the game developers. It felt, likely due to my past, very much as not just a Religious telling, but one taking it’s base in Christianity, with iconography and models that, again to me, draw lines back to the stories of Jesus. I don’t want to go into too much detail here, because I feel it should be left open to the player to see the world of The Sojourn with their own eyes and experiences, and I’ve probably already ruined that. Just don’t be surprised if, shortly before the final chapter, you’re suddenly finding yourself a bit freaked out.

Of course, there’s nothing in the storytelling that says the Main Character is ultimately good. Sure, there are lots of bright lights and white trees, but that doesn’t mean he is not another L. Ron Hubbard or David Koresh.

Either way, the storytelling is nicely done, simple and a bit passive, with the beautiful environs doing a minimum of the work. You can absolutely play The Sojourn for just the puzzles, and simply enjoy the dioramas, or go overboard and try to decipher why the Mother character is doing a duck-face early on.

In brief, lots of puzzles, limited variation in mechanics but well utilized for the most part. Some cheesing. Very open storytelling.

The settings are quite well made, diverse and good looking, and the simple style seems in line with the loss of detail expected when someone is retelling a story. The design of the puzzles are generally quite good, but some feel like they weren’t fully tested for “work-arounds”. Music didn’t particularly stand out to me, mostly just pleasant background noise, and a few effects got rather grating over time, especially the eyes.

Hand-on-heart, some of the puzzles took me far too long, but I might not be the most obvious choice for a puzzle-player. The sheer number of puzzles, and the variety in how the basic mechanics are used, should allow most anyone to find a good challenge. Just still feeling like there were a few too many of them, and part of the challenge was to make it through them all and get that Platinum trophy.

This has to tie back to the puzzles, as there’s nothing else really providing entertainment. As said, the story is told passively and unless you’re super into taking apart what kind of swords are being held, or the type of fishing boat is found below you, it’s on the puzzles to carry this. And yeah, I did walk away from the game out of simple boredom from some puzzles.

I checked some playthroughs, and people look to be getting a good 3.5 hours up to perhaps 6. The game took me a good weekend and a bit, but at no point could I play it more than 2 hrs straight due to how fun it was or wasn’t. If you miss any of the Merits in your first playthrough it seems you can go back and collect them at the end of the game, or you can opt for a 2nd playthrough.

Game’s available on Epic Store for Windows only, Playstation, and Xbox, with a Steam release coming in 2020, and ticks in at 20-25 bacon-tokens depending on your location. Absolutely a reasonable price

Overall Score:A respectable of 6.8 out of 10