This game was played in a group of 4 and collectively in VR and normal mode.

“Ghostbusters before the Ghostbusters.” – That is essentially the plot of this very atmospheric Co-Op Terror game. I write terror for a reason, as the horror genre is not enough to describe the very feeling that encompasses you when you are entering this experience.
As far as I am aware, Phasmophobia has been made by a single developer and thus far has turned into a huge hype cycle with, at the time of writing, gaining five thousand concurrent players every day, currently at a peak of 82.000 players.

Phasmophobia takes place in various locations all over rural parts of the United States, in abandoned or residential buildings with reported hauntings. From log cabins deep in the neck of the woods to large abandoned mental asylums, the atmosphere is completely fitting and deeply captivating.

You (and up to three of your friends) are part of a paranormal investigation crew, acting as the team identifying the ghost and its hunting grounds for the “professionals” implied to move in and dispose of it later. You have a variety of tools to use and unlock through leveling, from simple things as a 15$ saltshaker (damn you, esoteric charlatans!), candles and crucifixes, to Digital Cameras, Motion Sensors and EMF Sensors.

A specialty of this game is that it is tapping into your microphone, so the game hears you. Through a spirit box you can talk to the entity, ask questions and will get vague answers. Asking the entity “Where are you?” may just result in a “far”, or, more terrifyingly, a “behind you.” 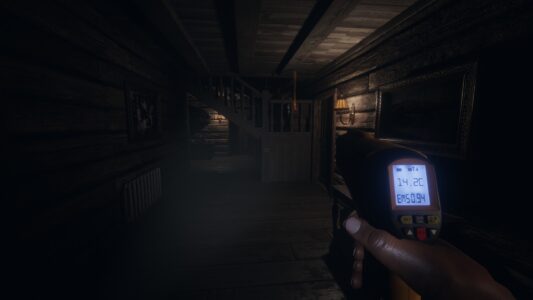 Same goes for the rather rare Ouija board, but not all entities react to these methods of contact. Some just appear, some just go for the kill and murder you or your friends, some disguise themselves or mess with you first.

We went into this game in VR first, without any precautions, in our dark rooms. The first thing we did after entering our first spooked location was to turn our lights on at home, as the atmosphere is terrifying. The second you step over the doorstep, you will have a feeling of dread building up inside you, putting you on edge the whole time you play.

Notable for VR is that the game is significantly darker and the added immersiveness caused by such a device may cause you to need your brown pants. Several times when we were testing the experience in VR we had to nope out of the house, as the ghost kept whispering into our ears in an absolute pitch-black surrounding. Even on a normal monitor this game is positively terrifying, as it perfectly matches the ambiance you would expect from those places. While it is not perfectly crafted (Shape, Gender and Voice of the entity don’t always match up), the ghosts’ mannerisms get to you real fast.

“Give us a sign,” we said, in a cold, dark mental asylum. We didn’t need a child hauntily singing a melody in the next room over, nor did we need the spirit of a patient then brutally murdering two of us from behind.

“Give us a sign,” we yelled into the darkness of an old american farmhouse. The Poltergeist throwing good beer around and then stabbing someone was an unfortunate accident.

“Give us a sign,” we cried in a pitch black suburban street house. The demon present in that dwelling then proceeded to lull us to safety with mild piano melodies before locking us in and murdering us one by one. 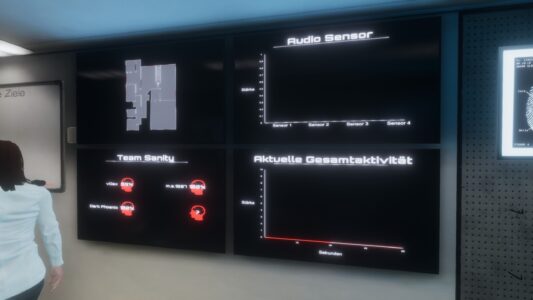 If you want to go in blind, consider the following part a mild spoiler in how to start off in Phasmophobia. Your first step should be to locate the ghost room, with an EMF Meter, a thermometer and the surveillance camera. A temperature under 11.6°C, or worse, sub zero is a clear sign of ghost activity and your ingame communication will come down as condensation in those rooms. Someone in your group may decide to stay behind in the truck and monitor the camera for orbs, or bring in the ghost book as well as the photo camera for evidence collection. You need up to three main evidence parts to identify the ghost and get the experience and money to progress in the game. The Optional quests give extra money and experience, as well finding bones and voodoo dolls, photos of your dead friends, Ouija boards or even the entity itself.

All in all, Phasmophobia has a bright future ahead of it, and, going by the public development Trello, the developer will get a solid fanbase out of this game with lots of updates and new maps. I for myself can fully recommend this game, for solo spooks and collectively wetting your pants with friends.

I hope you wore your brown pants.

Dex is a contributing writer for Bammsters, co-publishing reviews and previews in English here and on WorldOfDex.de in German.