20 years after the original Age Of Wonders, the franchise has put out its fifth game, Planetfall, doubling down on mixing 4X and Tactical Turn-based combat, this time in a futuristic setting.

Age of Wonders:Planetfall was played on Windows, and a review-key was kindly supplied by the publisher, Paradox.

Planetfall embraces Age of Wonder’s past and the series’ mechanics, but has allowed the Dutch developers at Triumph Studios to experiment in new directions with a new setting, factions, and story-telling – yes, story-telling in a 4X games: it really is a Brave New World for anyone who has so far only played Civilization, or really anyone who chooses The Assembly faction in Planetfall.

Fleet just does the flying 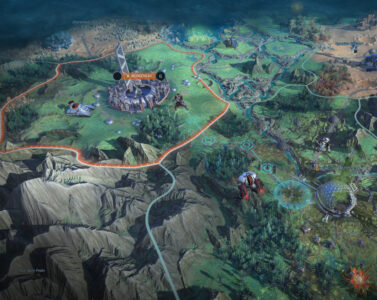 4X games are notoriously slow or long-winded, and the inclusion of Tactical Turn-based combat does mean that the games can end up taking even longer, but Planetfall’s main game plays fairly fast, both in terms of mechanics and progress, but also simply in terms of the wait-time as the AI makes its choices. Some other games get around that last issue by using concurrent turns, but even for a 4X with sequential turns, Planetfall doesn’t make you wait much, and nowhere near as much as certain others.

Combat is as mentioned Tactical Turn-based, but more importantly, often perfectly safe to skip – play the matches that matter, or the ones where you’re looking to just escape with whatever units you can, and let the rest auto-resolve.
No the Auto-Resolve isn’t perfect, and sometimes it’ll win encounters you were sure would be lost no matter who played them, and other times it’ll throw a match that the game insisted was safe. But these are extreme cases, and rare, and on average it seems to even out.

Come on you apes! You want to live forever?

You outfit armies of up-to 6 units, optionally including heroes that can extend the abilities of regular units. Heroes lend the game an RPG-lite feel, with levels and skills that grow over time, and both they and the basic units can be outfitted with mods to improve some aspect of them. Ranged units can benefit from better aim, more range, or simply bullets that go through walls, while you might want some teleportation on those melee folks.

For the heroes you can super-optimise them for a role, selecting their weapons, mods, and skills to all focus on a single aspect like psyonics, or just pile on randomly because why not.

Fun comes when you get multiple armies surrounding an enemy army, and let them all join in on the fight. Suddenly you go from a 6-vs-6 to a total of 42 units on the field split between the two sides in some fashion, and get some truly epic encounters, whether it’s because you’re throwing masses of late-game units at each other, or you’ve brought along 2 stacks of cannonfodder to meatshield your main force in a tough fight. Be aware though that some fights have to be with just the 1 army, but at least you can still throw some base units at the enemy to soften them up first.

You’re some sort of big, fat, smart-bug, aren’t you?

Factions in the game follow pretty standard lines for this sort of thing, though the space-elves don’t really have pointy ears this time around.

You got your default humans in the Vanguard, who used to run the galaxy in the form of the Star Union, and who gots all the fancy toys. Also lots of weird secrets and plot-twists, because why not.

Up next is the Kir’Ko, aka the bug infestation, who used to have a borg-queen, sorry bug-queen, who telepathically controlled them. Now, there’s no hard hive-mind, but still lots and lots of bugs to play with.

A bunch of women got stranded on a planet when the Star Union accidentally fell apart, and they did the only reasonable thing and put lasers on all the animals. No really, The Amazons make the poor dinos fight for them, while they play with bows.

And you can’t have Space Elves without Space Dwarves, so enter the on-the-nose-named Dvar. Really good at blowing shit up without blowing themselves up, they are perhaps not as easy-mode as the Vanguard, but more fun!

And because humans, there’s The Syndicate who just want to trade and betray, like all rational people, and slightly more freakishly you got The Assembly, who played a few to many games of Cyberpunk, and ended up making too many modifications to themselves. Different playstyles, both good at not staying dead.

Of course each come with their own stories, and reasons for killing the other factions, and there are commanders forming factions within factions so you get some fratricide or nephew-cide or whatever.

The game hits pretty much every note it tries to play. The 4X gameplay flows well, the combat is well executed but with some minor annoyances, the factions are fairly balanced and sufficiently unique, and the story lines varied and at places quite different from any other 4X games. 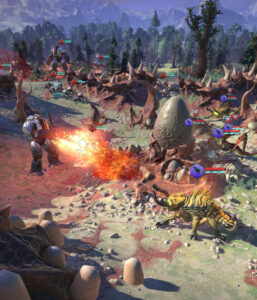 Campaign mode has you going through different factions and learn what makes them tick, why they fight and how. It also has both fairly boilerplate story-bits, and more outrageous missions where you’re chasing a hundreds-year old penguin that ate your pet.

A single studio keeping a franchise alive this long is kinda impressive but there are places, especially around UI/UX where the game feels outdated and awkward or slow to use. On the whole there’s room for some Quality of Life improvements that other 4X games have had time to discover, and I can only hope Paradox and Triumph Studios includes some work here in the 3 announce DLC packages.

Any fans of 4X or Tactical Turnbased combat should feel right at home, and if you’re into both genres, or really just played a lot of other games from publisher Paradox, I can’t see a reason to not get Age of Wonders: Planetfall.

Design: 7
The visuals are good, pretty clear and the factions visually distinct as well as mechanically separate. The 4X gameplay flows well, with its own unique approaches to things like territorial ownership and defences, while the combat comes across as fairly standard fare but lifted up by the RPG elements.

Challenge: 8
There is definitely plenty of challenges with the varied, and dare I say non-standard ways to victory, along with the story-based challenges, and simply options to set up your own scenarios. Add in Mods, and it should be a while before you find it all too easy.

Fun: 8
The story-lines are diverse, if at points a bit trope’ish. Some of the stories in the campaign are outright absurd, but in a good way, and there’s room for a good chuckle. Also, I’m still not over the murder-penguin!

Longevity: 8
Very play-style dependent in many games, more-so in Planetfall due to the combat mechanics. If you just play the campaign bits and skip most fights you’ll still be looking at high double-digit number of hours. Add in mod support, custom scenarios and so on, and the sky’s the limit. If you are into this gameplay, the only thing that will stop you is tiring out and the occasional outdated design element.

Price: 6
Steam and GOG have had the Windows version since early August, and you can get it either for about 50 bacon tokens, and the 3-DLC season-pass for another 40’ish monies, or the whole thing plus a cosmetic package for commanders for 90 beer tokens for the Premium edition.
Over on the consoles, PS4 and XB1, it’s the same story.
Not the cheapest game, not expensive either.