A Tower Defence styled Sci-Fi game set in space with beautiful set-pieces, a nice little story, varying mission types and tech-trees you can fill out as you go, all sounds like it should be right up my alley … Like, it REALLY ought to!

The Phantom Signal was played on a mac, with a review-key kindly provided by the developers Veslo Games via Woovit.com.

At its core, Phantom Signal is a real-time Tower Defence game, with added resource-management. In the early stages you’re still dealing with enemies coming in long-separated waves, letting you set up harvesting, infrastructure and defence, but in later stages you’ll find enemies coming at you almost constantly.

Where similar games set in a more ground-based setting often requires you to build roads, Phantom Signal requires you to build nodes, linking power-generation to miners, turrets etc. These present both some freedom, as you can more easily link things, and make sense in the setting – there’s no minions traversing the network on foot or similar, just bursts of energy being sent along the wires to build and power installations.

Not surprisingly, the nodes distributing power are weak-points, that needs protecting, and you have lasers and rockets to do just that. Initially there’s just the lasers, but you can chose to unlock rockets and upgrades in a tech-tree with points earned from completing missions.
Now, I say “chose to unlock”, but there are literally missions that cannot be completed without rockets, because of enemies staying outside the range of your lasers, and only reachable by rockets. Yeah, I have no idea how that works either. 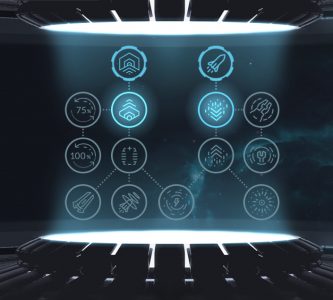 The tech-trees, there’s 2 of them, have a nice feature where you can reset your point allocations, allowing you to focus on what each mission needs, even if it’s not the most needed thing. This also does help if you’re finding yourself having gone the wrong way early on.

The UI is very much, uhm, how to say this delicately … Touch Friendly? Buttons are big, actions are simple, and generally everything is easy to find. This is not a bad thing, but it does look like it would be perfectly at home on a tablet. Add to this an overall cleanliness on the UI and visual elements throughout the game, which also carries over to the music, and you have a very user-friendly experience.

Graphically the game is mostly quite nice, with soft colours and pretty backgrounds, and very clear separation of colour schemes. It does hit that emptiness-of-space feeling, though you shouldn’t be staring at the backdrops. The enemies look a bit 8-bit’y, and less clear what some of them are supposed to be or do. It doesn’t particularly detract from anything, but they do look sort of out-of-place.

There  is also a story, which of course revolves around this mysterious Phantom Signal, but mostly serves to progress you from mission to mission. It’s good enough for what it is, but don’t expect to see it nominated for a Hugo.

This particular type of game, tower defence with simple enough mechanics that you don’t have to think too much, makes for excellent relaxation when you need to empty your brain, but for some reason Phantom Signal doesn’t manage to hit that point for me. The missions are not completely open-ended, enemies come from known directions and in repeatable patterns with a basic AI, and some of them feel like slog-fests. One specific mission is basically 10 minutes of defence against continuous attacks, which isn’t overly relaxing, while another as mentioned earlier can be failed simply by not having rockets unlocked, which is just irritating.

To me, these things do detract from the experience, mostly because I associate these games with a bit of unwinding. If, instead, you’re looking for challenges and fun, the game does include this at least to some extent – it’s not an easy game, but also not the most difficult of its brethren.

Design: 6
As mentioned, the graphics are nice, clear, the UI is clean, the music is clean and fitting … Yup, it’s all very … clean. Except for the enemies, which are odd blocks.
The inclusion of buttons to choose game-speed is a nice touch. 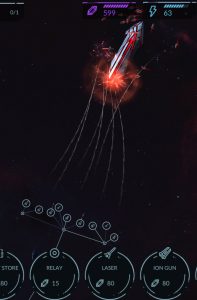 Challenge: 8
The game does present a good array of differently structured missions, that can be solved in various ways. I didn’t care for a few of them, finding them annoying, but for others they’ll probably be right on the money. Some of the missions will have you play them a few times to figure out the best strategy, and the game does seem to target those that want a challenge.

Fun: 5
It’s a small, entertaining game, that probably should be on something more portable. Our 5-out-of-10 score here is basically meant to show that it’s very middle of the road in this regard, but doesn’t bring anything really innovative.

Longevity/Replay: 3
You can play this repeatedly, but soon enough you’ll have the mission down pat. It’s not procedural or random, the AI is not exactly adaptive or anything, and the tech-trees are not big enough to offer anything here.

Price: 7
At 4.99 EUR/USD, there’s not really much to be said about the price. On a portable device, it would be tempting to say it should be ad-based, i.e. free, but a fiver for a game is hard to refute. If you like RT Tower Defence games, consider picking it up instead of a burger menu.