Moe: The Boundary of Reality – Preview

Moe is a 3D action/adventure platformer with a cute neon-punk art style.  The game has some RPG elements to it in the form of various abilities and weapons you can acquire as you play, allowing you to navigate through the world by creating new paths and upgrading your combat capability.

(The Developer kindly provided a key for us to look at the game.)

You play  as the “Child of Hope”and you enter into the world along with the 4th Angel.  The 4th Angel is the name of your nemesis and it is there to destroy the world.     It is up to you to choose if you will save this world. There have been 3 other children and angels before you  who have brought war, despair, apathy, and destruction on a massive scale to this world. Billions of lives have been lost and most of the world is left in uninhabitable ruins.    The story seems interesting. Typically, I’m not a fan of the old “you have amnesia so you don’t know your past” setup for a main character. I felt it got played out in RPGs a while back, but the reason it actually doesn’t bother me in this scenario is how it has been integrated in the story.  People are basically “plugged” into this virtual world and it is where they live now. Somehow your memory card was erased, a process which coincidentally has given you a minor ability to alter the reality that you are in. This game is the first of three chapters where you go through and combat Angels to save the world.

Visuals are really cool.   I completely enjoyed the low-poly neon art style and besides, who doesn’t like cute neon-punk kittehs?  The music is a great companion to the visuals and the two work very well together. One thing to note: the game voiceover is all in Russian with English subtitles.  This is not meant to deter anyone away from playing, far from it! It seemed to work well with the overall aesthetic of the game, but if you are not a fan of reading subtitles to get the story bits then you should be aware of  it. As far as I know at this time, they don’t plan to record an English version. 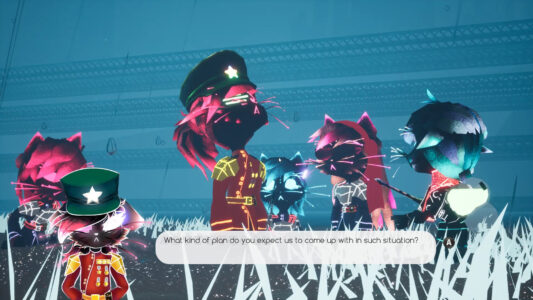 Movement works fine on a controller or keyboard & mouse for the most part, though sometimes I found myself diving unintentionally.  Occasionally during combat, the camera would be in a place that made it difficult to see what was happening but this is an issue I’ve seen with several other 3D platformer titles, so it is not something uncommon for the genre.  There were a few times I got “stuck” in something and couldn’t walk/run in a direction I should have been able to, but I was able to work my way out by jumping and turning to get out of the space I was trapped in. When playing with a controller instead of KB & Mouse there were also a few times the camera seemed to be stuck as it didn’t respond to the controller.

I really, really enjoyed the frequent auto-save points in the game, so when you die you don’t have far to retrace to continue forward.  As to combat, I seemed to do ok in combat (for the most part) by button mashing and dodging my way through – which is fine by me, as I don’t always enjoy overly complicated combat mechanics.  That said, I’ve not yet completed the game so I’ve not fought the final boss to see how that encounter differs from the others. 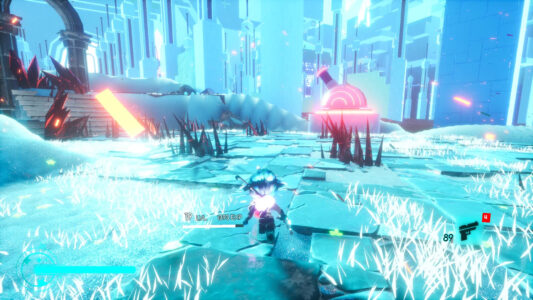 At times it wasn’t clear which way I should go and there was once or twice I got out of combat and ended up going the wrong way…maybe level design could use some additional “things” to aid with them looking/feeling different as you progress through the level. (Or maybe my ‘hunter’ brain takes over during combat as I ignore my surroundings outside of the immediate combat area and then don’t realize I’m getting turned around.)

Another feature your character unlocks as you play is something called “Moe Powers.”  I would need a really good tutorial or a heck of a lot more time playing the game to get these powers to a point where I was comfortable using them in any kind of situation where time was a factor.  As it was, when I played on KB & Mouse which is my preferred controller setup, I found myself switching between KB & Mouse and controller to place objects as moving/placing them right where I wanted them and it was difficult at times just using one or the other setup – admittedly part of that could be my limited experience using a controller.  I didn’t care for the time limits which exist on the objects I created with the Moe Powers and I would rather their destruction was based on your distance from it, but I did like how you could shoot it to manually destroy it if you misplaced the object. Though, most likely the biggest reason why I didn’t care for this, was due to not being fully comfortable placing objects in the 3D environment while also trying to navigate it at the same time. 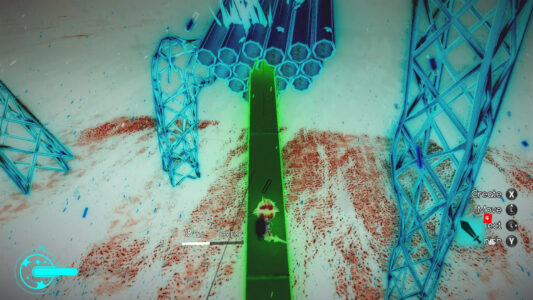 Would I recommend the game?  If you like 3D platformers, Indie games, and don’t mind the occasional glitches that can come with Early Access titles, I’d say it could be worth your time to give Moe a look or wishlist it for when it has its full release if you’re not into Early Access. Just be aware the current price tag is good for the Early Access period and will go up once the game goes on to a full release version.  When we got a chance to interview the Developer, he was pretty passionate about getting this game finished and has been very interested in hearing feedback from the community about their experience with the game. So if you check this out be sure to leave some feedback on the discussion boards on Steam.

Moe:  The Boundary of Reality is currently available in Early Access on Steam, (only for Windows PCs), at a price point of  $8.99.

For more information on the backstory and development of the game you can check out our interview:  Rated-R, Episode 178

Moe: The Boundary Of Reality