Not long ago we had an opportunity to talk to Bedi about Luna and Drac played the game when it released but somehow his review hid in the shadows till just recently. (Interview link below.)

A review key was kindly provided by the developer and the game was played on PC.

Luna: The Shadow Dust is a point & click adventure puzzler that has been fully hand-drawn and animated. The art style appears heavily influenced by Studio Ghibli’s stuff and yet still manages to stand out on its own. The music is equally as beautiful as the visuals and the two combined craft a wonderful interactive artwork that is simple to use yet still manages to be challenging at times.

There is no dialogue, written or spoken throughout the entire game so the story that is told is conveyed entirely through the cutscenes and puzzles and left up to the player to interpret and I won’t spoil any of that here but instead leave it to you to discover as you play.

You’ll play as two characters that are tied together in a mysterious bond. One, a young boy, and the other a sort of cat-like creature that seems to know more about what is going on than it is able to communicate. You’ll switch between these two as you work your way through each of the rooms in order for them to solve different pieces of the same puzzles so that you can progress upward through the tower.

I found many of the puzzles to be fairly straightforward as I made my way up the tower. There were a couple that did take some time, and at one point I had to step away and come back to the final puzzle after a break as I was staring at it and not seeing the solution, (a mechanic introduced earlier in the game), which was right in front of me the entire time. As to how hard the puzzles are or how long it takes to play through the game, your mileage will vary based on your investigative and interpretative skills, and if you run into trouble just remember to consider the lights/shadows and colors when trying to figure out the solution. But if you find yourself completely stuck there is a discord you can join and ask for help:  https://t.co/PnsQxwnJwz?amp=1

One question I’ve seen about Luna is if it is a game for kids or if it is too dark. Personally I feel the story is not so dark or scary that most kids would be turned away from the game, but I do wonder if some of the puzzles might prove a little too difficult. But then again children sometimes recognize a solution for a puzzle that an adult struggles with because they’ve over complicated or over thought it. If you are unsure I’d recommend playing through it to see, or even playing through it with your kid and offering input only when/if they’re stuck. 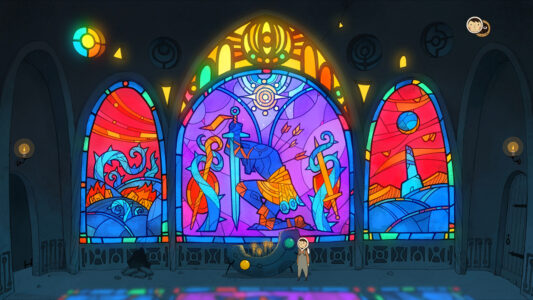 As mentioned above, the visual and sound design of this title weaves together beautifully.

While I found many of the puzzles to be pretty straight forward there were a few that took me a little longer to figure out.

I certainly enjoyed playing through Luna and felt a rewarding sensation when solving many of the puzzles.

On my playthrough, I did miss a hidden level and several achievements, so for achievement hunters there are at least a few reasons to go back into the game, but I would suspect most players will play the game through once and may not feel the need to do so again.

At $19.99 and especially considering how much work goes into a hand-drawn and animated project like this, the musical score and just the fun of playing the game it is well worth the price tag.

I thoroughly enjoyed my time with Luna, even while being frustrated trying to figure out a puzzle and I can certainly recommend this game to anyone that enjoys puzzle games and especially ones that are hand-drawn and animated like this.

Luna: The Shadow Dust
This website uses both 1st and 3rd party cookies.
For more details on this, and how we handle your data, please refer to our Privacy Policy, and those of 3rd parties.