Hexters is a “City-building strategy/action game” and the developers list their inspiration from games like Darwinia, Settlers, and Anno, as well as films like Tron, and between the visuals and playing it for a bit I can certainly see some of those influences.  Now, it should be noted that the game itself is very Early Access, and at the time of writing it is only version 0.1.2, so bugs should be expected if you pick this up before full release, but the developers have been pretty good about interacting with the community, checking out livestreams and YouTube videos and seeing what they can learn from how folks are playing the game, and where they struggle with it. Though with only one or two exceptions, what I’ve seen thus far has been a pretty polished project.

You play the game as the “user”, working in concert with some helpful programs that introduce themselves and teach you about the game mechanics along the way. As with other city-building and strategy games you will need to collect resources from the surrounding area and (after the first couple levels) protect your base from the scourge of virus-like programs that come at you from various Hives around the map.

Initially you’re just focused on building a few buildings and gathering resources that are close by but soon enough you’ll find yourself under siege by these little red creatures intent on destroying your carefully placed infrastructure. All you can do to protect yourself in the beginning is place

some turrets to keep them at bay, and they’re generally well suited to the task provided 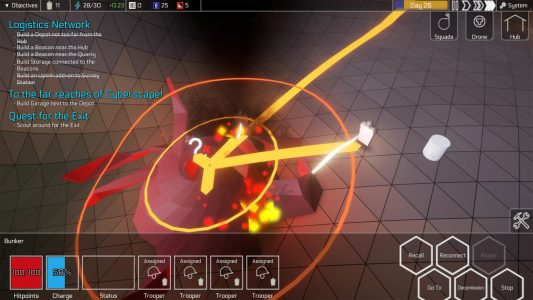 you place them properly to cover

one another. Although after a while you’ll get an opportunity to build a bunker, which is a sort of barracks that allows you to train a limited number of Hexters as a sort of Squad of Marines, that can go out and decimate the Hives at your command.

As you acquire resources and refine them to Bits, you can build other stations to refine those Bits to Bytes, and the Bytes to Triangles.  Each of these more advanced resources will be needed to craft more advanced structures.  The only gripe I had with this was that if you are not careful and leave these refineries on, you can run low or even out of bits in some cases and there didn’t seem to be a way to break them back down. This could lead to a game ending situation where you’re unable to continue due to a lack of proper resources.  Though on the third level this did seem to be addressed somewhat with the addition of a Mine that had what seemed an endless supply of bits that could be mined, but I’d still appreciate a way to break down resources.

Early on the camera is zoomed in, a little too close for my taste and you’re unable to zoom out very far in order to get a ‘bigger picture’ of what is going on and there is no mini-map feature. A few levels in you’ll gain a helpful ability to build an Uplink onto your Survey Station and that allows you to zoom much further out and get a better view of things.

Once you’ve got your main infrastructure down and protected, a Scout Drone, and some Hexter Marines, it’s time to explore and branch out.  Currently the game has only 3 levels available to play, though the Devs seem to be working tirelessly to add more content, refine what is available, and communicate with the community.

Other thoughts on gameplay, gripes and suggestions

I noticed when playing that sometimes the Hexters would seem to be confused or not know what to do and in a few cases it was difficult to get them to follow orders and mine a resource or repair an old building. Like one issue I ran into with the Scout Drone I wonder if it is a pathing issue that will need working on.

At one point you can construct a vehicle called a Bit Loader that you can load up with lots of Bits and it will transport them and several other Hexters (who you can assign to it) around the map at a much faster speed, and you can then unload the Bits for construction. While this works really well and is a nice addition, it seemed a little strange when the truck wouldn’t unload on command. I later discovered that they only seem to unload if there is an active construction project in need of those resources, but thought they should also be able to unload to a Storage area.

There is a feature that allows you to pause or speed up time and I can’t say enough nice things about that. I absolutely loved that feature as I can get fairly impatient when just waiting for them to mine/refine resources or construct buildings.

Lastly, though I believe very importantly, I would very much like to see an option for custom keyboard mappings added to the game as well as some kind of slider to increase the movement speed of the screen. You can use WASD or the arrow keys to move the map around but it is very, very slow when zoomed out. You can also click and drag the map and that is much faster, but at least for myself I like to move the map around with the keyboard while keeping my mouse free for other tasks.

I have to say that at first when looking at the game I thought the trailer was rather funny, the game looked simple enough and because of the types of games I usually play I expected this wouldn’t hold my attention for too long past the initial curiosity phase.  I’m actually pleasantly surprised to say that I got sucked into the game and lost track of time. Not only did it hold my attention and keep me entertained but I found I kept wanting to explore and expand across the map.

The developers from Draconus Entertainment were kind enough to provide a review key for us and the game was played on PC.