This second installment into the Mexiverse from Drinkbox games features some amazingly visually vivid levels, 4-player Co-op, new wrestling moves, sassy new bosses, twice the enemies, and apparently quite a bit more “fowl” creatures than the previous one.  Unfortunately I never played the first so I can’t do a “blow by blow” comparison of the two games but what I can say from having played this installment is that I’ve enjoyed it quite a bit thus far.

Guacamelee! 2 is a Metroidvania-style adventure in which the story begins with Luchador Juan being called out of retirement where he must travel across dimensions to face a new enemy that threatens potential destruction of the entire Mexiverse. Uay Chivo, an old man who can turn into a goat, shows up Gandalf-style and calls you back into action pulling you across different dimensions and even beyond death itself!  From there you start your perilous adventure punching, kicking, and throwing your enemies around the screen like any badass Luchador should! At times even shifting back and forth between two dimensions to combat enemies in both in order to clear an area. In this new dimension Juan has traveled to, he was defeated and another rose up in his place to defeat the “big bad” from the first game but the mask this new hero wears is the “Mask of Vengeance” and has caused a sickness that is killing Salvador and now he has gathered some henchmen and is seeking 3 magical artifacts that when assembled could well lead to the end of the Mexiverse! It’s up to you as the last remaining Juan in all the dimensions to prevent Salvador from dooming everything to oblivion. It’s been seven years of peace since your last battles though, so you’re going to have to go off in search of the Sacred Mask and get back into shape if you hope to defeat Salvador and his henchmen. 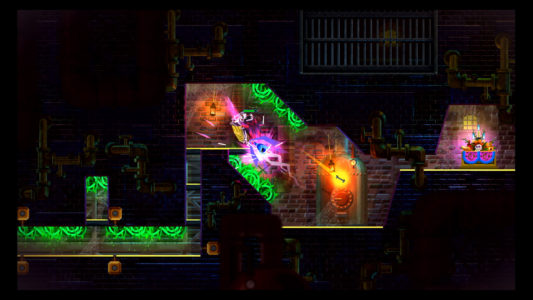 You’ll find various characters along your journey that you can spend coin on to train you in a variety of different upgrades and fighting moves. Some give you power ups or additional options in combat, others grant abilities which will allow you to access new areas previously blocked off to you. You’ll even gain the ability to transform into a chicken along the way, and learn new chicken-centric fighting moves as well.  Yep, you read that right, not only are you a badass Luchador but you can also turn into chicken with a penchant for estacas and the skills to back it up. Starting out you’ll get to pick from a few different characters to play as, with additional options that unlock later in the game so you can mix it up and play as Juan, Tostada, or even the old man Uay Chivo! 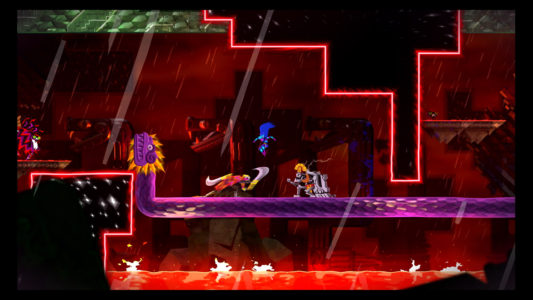 It all makes for a game that at times will crack you up laughing and others make you scream in frustration ready to suplex your screen because of a tough series of jumps or combat…or both at the same time. But I will say, the one thing I really appreciated about the game in this regard was that even though at times it felt obscenely challenging it was not overly punishing for failure. I truly loved how it would put you back at the last place you stood on solid ground if you missed a jump (or series of them) and died as a result, it doesn’t Super Kick you all the way back to the beginning of the level and force you to start all over. This allows you to plancha right back in the ring and try over and over again, (and then again a few more times at some points), till you get it right and that really helps to mitigate the sense of frustration you can get when you’ve done something 2 or 8 times and you miss it by just a hair and have to try yet again. Even if you die due to lack of health (instead of insta-kill from a trap) the checkpoints that are in the game are pretty plentiful.

I’ve had a great time playing this both on my own and a little with TJ (Co-host for “Comic Shop Talk” on our show).  I will say two things though about gameplay and added difficulty that will do you no favors. First is if you play on PC don’t bother trying to play this with a keyboard, make sure you’re using a controller or the frustration can quickly surpass the fun of playing it.  The other is Co-op, if you’re going to play this with some friends, I’d suggest each of you get some time playing and practicing before trying to play together. In many of the levels you need to time jumps just right, and in some shift between dimensions mid-jump.  If the other players don’t know the controls as well it may not be a very fun experience overall.  That said, the combat is awesome tag-team match-up for you and your homies to brawl with the enemies. 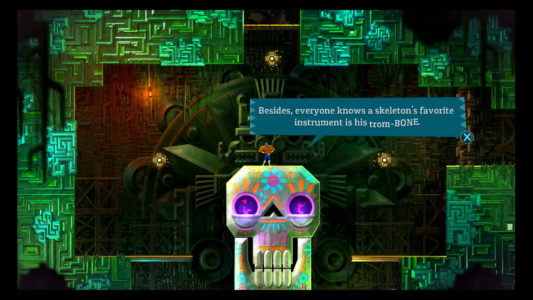 We break down our ratings into five categories and rate the game on a 1 – 10 scale with 5 serving as “average” and then average those scores to a final overall rating.

Everything about the art design (especially the vibrant colors and lighting) and music in this game fits really well together. Plus it is was a refreshing change of scenery for me to play something of a different cultural mythos than your typical western European fantasy or sci-fi stuff.

While at times it is run of the mill metroidvania run/jump/dodge/attack, it quickly mixes in plenty of places that could have you ninja-gripping your controller in frustration ready to ninja-star it out the window, due to failing to get through a series of jumps and dodges. This difficulty can quickly escalate even further in Co-op though due to how some of the levels are designed and the coordination you’ll need with your compadres to surpass them.

The sense of humor, the absolutely beautiful environments and gameplay all blend really well to create a truly fun experience whether you’re playing by yourself or cooperatively.  At times the difficulty can detract from the overall enjoyment of the game, however it only adds to the sense of accomplishment you get once you’ve successfully passed that particular challenge.

There are some places out of the way that I found to explore (and probably some I’ve missed), but it is how much fun the game is to play that draws you back in, that and if you have any interest in speed-running or practicing at getting better at this type of gameplay there are plenty of opportunities for that.

At $19.99 ($15.99 for PS Plus members) this game is more than just fairly priced for the amount of time you’ll get playing it. Almost 5 hrs in and I had only scratched the surface at about 13% of the world unlocked and hadn’t even tried multiplayer at that point yet.  I’ve seen that the developers say gameplay will last around 10hrs, but I can certainly see myself taking longer than that to complete this game.

I think this may be the highest I’ve rated a game thus far. Between the beautiful set design/artwork, the great musical soundtrack that fits perfectly with the game and a wonderfully frustrating difficulty that while certainly tough in some areas doesn’t punish you overly much for failure, this has been a fun ride so far and I’m looking forward to diving into it some more. 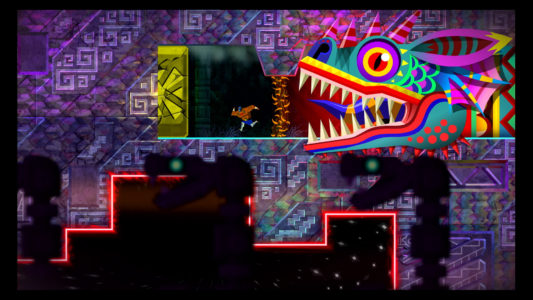