Grimshade is a party-based RPG with a turn-based combat system that takes place in a world at war. There are monsters and magic, in the form of a substance called Ether, and anthropomorphic creatures you’ll encounter, some that will fight alongside you throughout the story.

Grimshade begins just as war breaks out with another kingdom that has invaded the city you, a wannabe champion lives in, and the story unfolds from there following your party as you hope to save your city and find out what happened to the other missing champions. You’ll control a small group of adventurers as you walk around hand-painted environments and engage in turn-based combat when attacked. 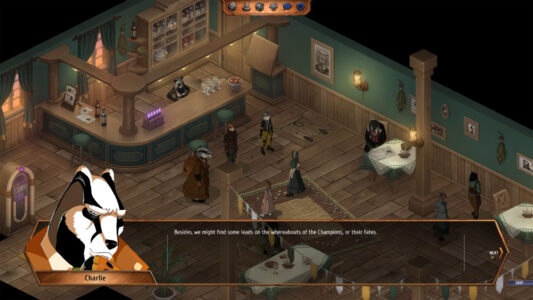 I really enjoyed the art-style of the game and they do have 4K resolution support for any with such inclinations. The music and sound effects were a nice companion to the overall feel though I did find it slightly odd there didn’t seem to be any separate/special combat music to differentiate it from traveling. The story itself is mildly interesting though it never really grabbed me in a way that kept me engrossed and there is no voice over so you’ll be doing a lot of reading. There’s the odd spelling or grammatical mistake but nothing that I found particularly bothersome and considering this was made by a small dev team in Russia and then translated into English I’m not shocked to find a mistake from time to time and didn’t find it to be a big deal.

While traipsing around the environments you are free to move around without restriction though I did find pathing to be problematic from time to time. The character would often get stuck if there was an object directly blocking where I wished them to go and from time to time you’d have to “lead” them around the obstruction. You’ll find plenty of items to interact with or inspect as you search around, some will have things you can pick up and others provide background lore for the game world. Characters don’t acquire skills or level up in the typical fashion, in Grimshade your abilities are gained or limited by the equipment you carry so you’ll gain access to new abilities throughout the game based on the equipment you find along the way. 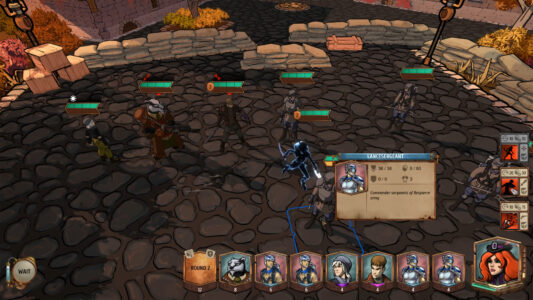 Once you land in combat you’ll get the opportunity to line up your group in any formation that you wish, and even though the devs boast complex tactical battles I often found myself just lining most of the characters up behind my champion (Alister), as he could shield anyone behind him from ranged attacks, and then doing my best to keep him alive while also taking out the enemy forces. A nice feature in combat was being able to move and zoom the camera, so you can rotate around and zoom in or out as you play. But one thing I didn’t care for with regards to combat was there seemed to be an invisible line across half the battlefield that the characters could not cross which effectively limits any melee character by only allowing them to use melee attacks against frontline enemies. Though Alister does have a secondary ranged attack, it’s weaker and thus takes longer to whittle down the enemies in the back.  This can also work in your favor as well from time to time so there is that. Another thing I was a little disappointed by is that there’s no in-combat healing mechanic, but you can at least counteract different status effects. When you need to heal, you’ll only be able to recover between battles, which consists of using up healing pouches that were rather expensive or taking a trip back to the starting tavern and then heading out again.

I really enjoyed the look and feel of the game as well as how things were animated on screen.  The sounds and music were made well and contribute to the overall feel of the environments.

Grimshade can certainly be challenging in some of the encounters though overall I felt it was on the higher end of average for how hard it was.

Whilst the game is and can be fun especially for folks that enjoy this genre it didn’t necessarily stand out in any particular way for me beyond the art-style. Aside from the pathing issue and once you have a feel for the different combat abilities it is enjoyable.

You can experiment some with the abilities you gain while finding new equipment but after you play through the story I wouldn’t see much reason to come back and play it again.

At $19.99 on Steam the price seems pretty fair for Grimshade.

Developer kindly provided a key for review and the game was played on Windows.