When I started this review, it was suggested that I don’t go full-on Neil deGrasse Tyson on it. So, I’ll try hard to not point out that while the moon IS tidally locked, it’s not exactly in a geosynchronous orbit.

The game was played on Windows PC, and a review key was kindly provided by KeokeN Interactive and Plan of Attack.

It’s 30 years in the future, and humankind has effed up the planet’s environment so badly that they decide to microwave it from space. This of course goes wrong, something fails and you’re sent alone to the moon 5 years later to investigate! Yup, us humans just ain’t getting smarter in the next couple of decades.

Fly Me To The Moon

Deliver Us The Moon is less of a classical game with highscores and character progression, and more of an experience interspersed with mini-games. You take on the role of Fortuna, worryingly named from an ancient greek goddess of luck, and have to make your way from a rocket-base on Earth to the Moon via the Space Station responsible for the microwave power-transfer from a Helium-3 based powerplant on the moon. To get there, you have to solve puzzles, find stairs, inhale oxygen and cut a lot wires.

Level 1 is set on Earth, and does a good job of setting the initial mood, giving you the background story and teaching you the basics of solving challenges. It also includes the evergreen “Run-To-Elevator-During-Countdown-And-Then-Wait” trope, so you know no expenses were spared on script-writing. Narration is primarily by the game’s other main character via comms, but you’ll miss out if you don’t go explore the environs.
The final stage of Level 1 was set in a rocket cockpit with an in-scene computer screen that proved hard to read at times, and while the previous steps were all very smooth, this part ended on a low-point.

Can you hear me, Major Tom?

You don’t actually have to manually do any of the flying to get to the moon, though as Level 2 starts and you’re approaching Pearson’s Station in orbit at probably something like 58346 km above the moon’s surface, you get a first challenge of docking your rocket with the space station. This part will likely seem trivial to any KSP players, but it’s an excellent first introduction to the controls that govern the gravityless station.
More of the story is told as you progress through the level, find small mementos and hear audio-recordings from the previous crew. You get to navigate the different segments of the station, sort-of spacewalk through an unfinished part of it, and get hints to WHY it’s unfinished.

While the first level is clearly just an introduction, and a good one at that, Pearson’s Station is where the linearity of the game really shows up, guiding you through the station in ways that at times seems illogical or strange except for speeding you along to the next puzzle. It isn’t really a problem, just don’t think too much on why there’s only 2 crew-rooms yet workstations for 8-10 people.

Giant Steps Are What You Take 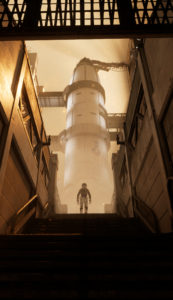 Soon enough you’ll get to the moon, with more room to look around, and move around, though it remains pretty linear. Here the game does a good job tying in events that predates it and add more characters to the story even though you’re still alone with just a comm-voice from earth urging you on.

More is revealed about the complete absence of the moon crew, and how the station crew tried to understand what was going on, and storytelling continues being the central part.

It’s difficult at this point to really talk about what happens next without spoilering things, and this game really needs to be experienced and not explained. The world around Deliver Us The Moon, the WSA, the Equatorial Desert and the people on the stations is fleshed out in a well-told story. Of course you can miss a fair part of this if you just rush through, but take your time and get into every corner and the writing rewards you.

‘neath The Cover of October Skies

There’s plenty of small gaps in the story, like He3 already exists in large quantities on Earth even if not easily accessible, while mining it on the moon still requires going through absurd processes (150 million tons of regolight per ton of He3), or lunar space-elevators, or beaming power to Earth’s surface, but ignore those and you get a good story in an nice setting and great visuals. Yup, I’ve taken a moment or 5 to just look out windows.

The game is out already, but there’s more on the way in the form of free DLC, and support for NVIDIA’s brand-new DLSS has also been announced to help make the game even better looking on RTX graphics cards.

Mouse & Keyboard controls work well enough but movement seems to flow better with controller. Unfortunately, using controller to interact with objects was fiddly, and at times outright frustrating to get it to aim properly. In a couple of sequences, where there’s a countdown as you’re trying to flip the right switches, this gets really detrimental to the overall experience. Having to still hit Tab on the keyboard to access notes and logs when using controller, is also strange. That specific function doesn’t seem to be mapped, or at least not mapped when using a Playstation DS4, and along with only showing default button icons from Microsoft controllers makes development seem a bit lazy. From my own experience it’s not an excessive amount of work to query what controller is attached, and use relevant mapping and icons, testing included, and if it solves the issue of having to still use a keyboard, it improves the general experience.

The visuals, the (mostly-absent) soundscape, the voice-acting, the puzzles are all very well done for the most part. There’s a few cases where puzzles are too easy, things are almost too linear, but that is in line with what Deliver Us The Moon tries to be.

Puzzles and challenges range from “accidentally solving without realizing there was one”, to “frustrating due to visual limitations” or “failing to recognize a box floating in space”. The on-rails nature of most of the game also limits this part as there’s never really more than 1 solution and simply trying every part until something lights up is an option in many cases.

This is an odd category for a game this sombre. Definitely enjoyable, with a good, well-told story. Controls are frustrating though, but I’m leaving the score at 8 in the hopes that KeokeN might address it in a future update.

So far I’ve seen no reason to replay the game, or try to explore other parts of the bases. You walk through pretty much everything due to how the game progresses, and except for the moment you stop to take in the surroundings, there’s a very predictable amount of time being spent. The news of a free DLC does help though, as I do want to return to the game, just need a good excuse!

At €19.99 on Steam, the price is very fair for what the game is – a linear story, an experience with puzzles, and it would also be fair at 25, or at the 30 bacon-tokens asked for the Collectors Edition, especially in light of the announced free DLC.