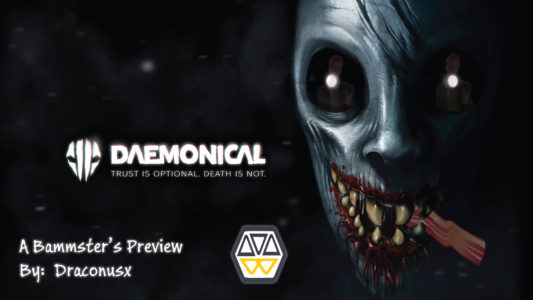 Daemonical is one of the latest additions to the Asymmetrical PVP Arena. It’s a 5-vs-1 from a first-person perspective. All players spawn into an area as humans at the beginning of the match and by nightfall one of you becomes the Daemon. The humans frantically scramble around attempting to find artifacts in the form of human bones and bring them back to an altar. If they manage to do this before the 15-minute timer is up then the humans win, though they can also win by finding places to hide and avoid being killed by the Daemon. But don’t try to hide in the water even though it seems to damage the Daemon as it appears to be populated with at least one shark, and it’s hungry. An interesting feature that keeps the humans involved even after being killed is that you can travel around as a wisp and warn the surviving humans of the Daemons location, or lead the Daemon to them if you’re feeling particularly evil.

In the various cabins found scattered throughout these creepy woods you may discover some tools or weapons along the way like a handgun or a torch. You might think these would assist with your survival but for the most part I have found it is better just to run and hide then to try and take on the creature. I’m not really certain if the handgun actually slows the creature down or not as I’ve not found much success using it for defense and I haven’t seen other players yet be able to use it effectively against the Daemon either. The torch however is very nice for self-defense but it does take a few moments in order to light it before it can be used to ward off the Daemon.

Night of the Daemon 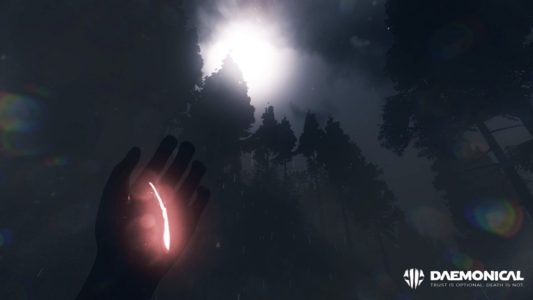 It’s the Daemon’s job to track down and kill each of the four remaining humans and to do so before sunrise. One of the abilities you’ll be giving us the demon is to be able to see the humans’ “spirit” when they are at a long distance which gives you an idea of which direction to go. When you get close however that goes away and you will have to seek them out with normal vision. Though your eyes aren’t always the only or even the best way to track down your prey. The way that the mic works in the game if you are close enough that you can hear them talking you’ll actually be able to tell which direction the sound is coming from and can follow that right to them. Just make sure you get them all before that 15 minute timer runs out.

The woods are suitably erie and the creature itself is definitely something that looks birthed from some hellish plane of existence. The matches with random folks that I’ve played have been creepy, suspenseful, and at times funny. I’ve found, for myself at least, it’s more fun to hunt as the Daemon than to run around hiding and seeking relics as a human. Though honestly I think that is more about how I like to play games than any fault of the game itself. I like to have a weapon I can attempt to stand my ground with but then that would go against the horror aspect of the game and would likely take away much if not all the feeling of suspense you have when running and hiding.

One note is about keybinding, I found that it’s best to accept the default. If you’re like me and you don’t typically use WASD and generally remap the keys, in this particular game at least so far, it’s not very wise to do that yet. I found playing as a human that became problematic as there are some keys that are used to do things that don’t appear to be able to be remapped or at least didn’t remap successfully.

As the game is still in Early Access it hasn’t always got a big crowd playing it but as more horror fans discover it I believe it has potential to be something that is both fun to play as well as fun to watch people play and get freaked out by the creature. I do find myself hoping that at some point they might add multiple different Daemons to choose to play as that might have different abilities, hat way you pick a Daemon you want to play as and if you are the one chosen to be the Daemon that round you’ll spawn as the Daemon you selected. I’ve not seen any mention of that yet it’s just a thought I had while playing.

And if you’d like to see what a match looks like with Drac playing as the Daemon and Rick-rolling his victims just hit play!