It has been more than 4 years since that day in May 2014, when CCP Games announced Project Legion and the transition from a console-centered, UE3-based shooter, to a completely rewritten Windows-exclusive game.

Meanwhile, it’s been periscope down for the team originally based in the CCP Shanghai office, only surfacing a couple of times at EVE FanFest to say that they are still working on it, announcing the shift from Project Legion to Project Nova, and occasionally engaging the old EVE: DUST514 veterans on Discord to reminisce about the now long-gone days on the PS3.

Yes, Game Director at CCP Games for Project Nova, CCP Rattati sent out a broadcast announcing that Project Nova is alive and well. Gone are the clone-soldiers of old, replaced by Elysians fighting on the outer hulls of spaceships and grand installations in the EVE Online world.

Also still gone are any thoughts of non-Windows platforms, with the communique pointing out Project Nova remains Windows Exclusive. 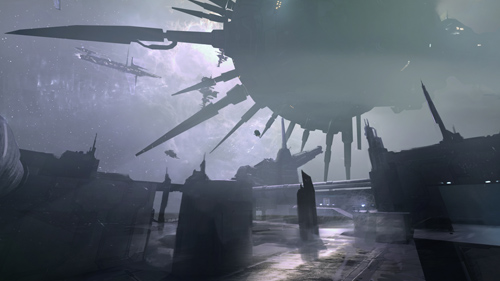 The new name for the soldiers, Elysians, is meant as a contrast to EVE’s Empyrians, possibly with CCP seeing the Project Nova players as heroes looking for Blessed Death and the Elysian Fields, just as the EVE players are inhabitants in the highest parts of the heavenly firmament where only Fire exists. Quite the ripe metaphors for tin-foils and flat-earthers.

Bound to please many of the veterans of CCP Games’ games is Rattati’s stated intent on “co-evolving” the game with the community from this point forward, which would seem to indicate Alpha/Beta versions of the game, and further interaction on social media. Exactly how this will look remains to be detailed though, but a sign-up website is available for those interested, and there will also be a process for veterans of the original to reclaim their player-name(s), possibly with options to correct some past naming incidents.

Mechanics Of A CCP Shooter

As this is a CCP Games product, players are right to hope for a continuously evolving game, unlike the regular shooters from other houses with 2-3 years of life, a few pricey DLCs, and then a new version. Rattati explicitly mentions the CCP DNA seen in EVE Online with a basic but strong game getting updates and never a sequel or resets. To this end, they are teaming up with Sumo Digital‘s Nottingham studio who have past experience building First-Person Shooters such as the Timesplitters series, Crysis series, Homefront, GoldenEye 007 as well as Star Wars: Battlefront.

Another stand-out feature mentioned is how they are focusing on a longer Time-To-Kill, with team-work and communication being key, something many DUST514 veterans highlighted as being key selling points. Combine this with combat taking place in the dark, muffled near-vacuum (or exosphere?) of the shielded space surrounding EVE Online’s signature spaceships, with CCP’s penalizing deaths and risk-reward proposition, Project Nova still looks positioned for a more dedicated, less casual playerbase.

Because of the initial focus on combat-on-ships, there will apparently not be any player-operated vehicles, one of DUST514’s features. Separately, Rattati has also confirmed that Project Nova takes place later in time, concurrent to EVE Online, giving way to new and different equipment compared to the first game.

From the rumors and speculation mills of the internet, there have been concerns about jet-packs, zero-G and mag-lock enabled running on walls and ceilings; EVE ships are not really large enough to generate anything resembling sane gravity by mass, but CCP has been talking about artificial gravity, from the ships and/or “Gravity Harnesses”, to give a gameplay-style like regular shooters. No “LawBreaking” here, but there will somehow be compasses.

Class specific dropsuits, or “Void Suits” are also a thing, with a suggestion to use a rust-red SKIN for camouflage on Minmatar ships. Logi and Light suits are still a thing, but focus is firstly on killing, with abilities being extra. How these tie in with the cool-down based ability/deployables mechanics that have leaked remains to be seen though.

At this point there’s still a lot of open questions about Project Nova, and we here at Bammsters will definitely be following it all as-and-when CCP Games reveals more.