Bacon Man, the man, the myth, the succulent pork. Due to our love of all things Bacon, there simply was no way we could not check this game out. In this 2D, side-scrolling platformer you play as Bacon Man (or one of his 3 friends),  battling through the food groups to confront those who wrongly condemned you for killing your father. Clear his name by beating the Meat Kings into submission.

When they say Bacon Man: An Adventure is “tough as nails,” I felt that was a bit of an undersell.  Not only will this game frustrate you and make you want to quit at times, it may also draw you back in, just to see if you can get past that point you were stuck at, or maybe clear the level just a little bit faster.  Maybe It’s just been a while since I’ve played this kind of platformer as there were times I’d come back to it only to speed through an area I was unable to clear just the night before. That said, you’ll race, jump, and climb your way through level after level.

When encountering enemies you can melee them down, shoot them with your limited-but slowly regenerative ammo or avoid them all together if you’re speeding through. As you play you’ll pick up different items and outfits as well as gain points to improve your character’s power levels and health to help with your survivability.  Bacon Man also features a split-screen Co-op option so you can play with a buddy who also shares your masochistic streak. 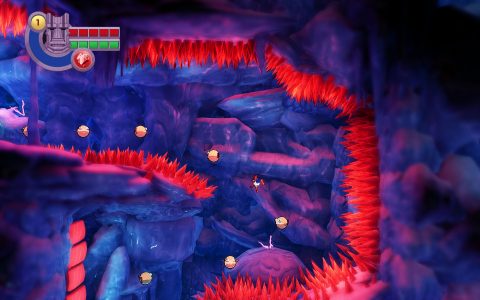 The true challenge of this game is navigating the jumping puzzles and various traps. There are several checkpoints scattered through each of the levels and you’ll be both thankful for them and at times curse there aren’t more of them after clearing a rather long or difficult series of jumps only to die to something silly right afterward.

The character design and humor of the game quite entertaining, though here at Bammsters we MIGHT be biased in favour of baconated humour. The music by Braxton Burks and Kyle Landry was rather well done also. The controls seem to work pretty well though at times jumping across some of the puffer fish was frustrating as landing on one in just slightly different spot could send you catapulting in the wrong direction.

This game is very challenging, frustratingly so at times.  While the enemies themselves aren’t much of a challenge for the most part, navigating the different traps and jumping puzzles will have you respawning over and over, with the likely inclusion of explicatives

Bacon Man can be an enjoyable Adventure, the jumping puzzles can be especially frustrating which detracted from that enjoyment, unless that kind of frustration is your kind of thing in which case this score might be higher for someone like that. Getting your friend over, with some bacons to enjoy, will almost invariably increase the fun.

If you enjoy this kind of platformer then there is plenty of replay in it for you for speed running. There are also 4 different characters with their own playstyle so there is an opportunity to play the game at least 4 different times and get a different experience each time, though depending on your experience with the difficulty you may just be happy to have finished the game the first time around.

The developer kindly provided a review key and the game was played on PC and Mac.