Attack of the Earthlings is a Turn-based Strategy game with a comedic twist. Here you play as an native species defending their planet and resources from an evil invading force of alien humans.

The game begins with an Earthling ship landing on a foreign planet and then starts the process of stripmining all the resources from that planet. You play as a Matriarch, one of the creatures native to that planet, hell-bent on stopping this process by entering the Earthlings ship and destroyingany Earthling who crosses your path along your way disable or destroy the ship. Basically they’ve taken the ole trope of, “Aliens are invading the world and it’s up to you (insert hero’s name here) to save the planet, and turned it on it’s head.  Instead of some strange alien race invading earth, the humans are the ones out in space seeking new planets to tear all the useful resources from and you’re a strange alien version of Furiosa.

You’ll start each level with only the Matriarch, then as you defeat humans you can feast on their “biomass” which you then use as a sort of fuel to spawn (and eventually upgrade) new units. The entire game, including out of combat is done turn-based style so even if there aren’t any enemies in sight you’re still limited to a certain number of moves per turn. You’re not required to use up all your movement, as there are times when it is beneficial to hide in a closet or duct and wait for an enemy to get within reach or pass you by altogether. 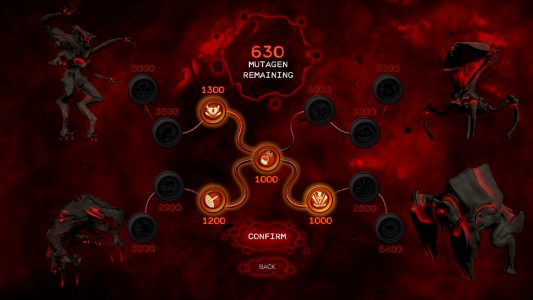 As to the units you can spawn, initially you just spawn Swarmers (basic grunts/fodder), but later you get the ability to spend biomass to upgrade them into either a Goliath (Tank), Disruptor (Ranged), or Stalker (A Trap-setter), each with their own abilities and usefulness to counter the various strengths of the enemy units.  I will say one rather annoying thing with the enemy guards was their ability to pivot, shoot and often kill regular grunts before they could even get within reach to do any damage so you’ll want to take advantage of an additional feature that can be used by the Matriarch which is to “infect” one of the human workers and then control it. Once you’re in the driver seat you can run around the level with that one unit unhindered and even use them to create a distraction so your other units can close the distance without being seen.

At the end of the levels you get the opportunity to spend points earned on Mutagen (upgrades), which allows you to increase the strength of certain units or can offer them new abilities. You can even swap out upgrades in between the different missions and the game doesn’t penalize you for that.

Here we break down our ratings into five categories and rate the game on a 1 – 10 scale with 5 serving as “average” and then average those scores to a final overall rating.  Attack of the Earthlings was fun and interesting to play, the look/feel of the game as well as the sense of humor was entertaining.

The overall look and feel of the game is great and very well done. The mechanics are not overly complicated, are easy to understand and work pretty well.

It’s a pretty straightforward though not overly challenging game. With a slower pace, being turn-based, and the ability to spawn and upgrade plenty of minions you should be able to get through it without too much trouble.

Between the quirky humor, getting to run around the levels as a matriarch spawning various other alien cronies to attack and gobble up the evil humans invading your home, this was fun to play around with.

Other than a mission on the 3rd level which I found a little annoying, playing the game was enjoyable but I’m not seeing much of a reason to replay this once completed – unless you’re hunting for specific achievements.

At $25 it is a little higher than I’d be looking to pay for a game like this especially with only around 10 hours of playtime.

The developer kindly provided a review key and the game was played on Windows PC.

Attack of the Earthlings